Sparkling in the City 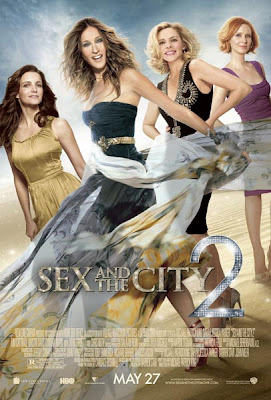 There are movies, and there are MOVIES.

After 2 years, the much awaited sequel, Sex and the City 2 is actually a respite from all the melodramatic or fantasy-themed movies that has come out for the summer. In spite of the very thin plot where the 4 girls - Carrie, Charlotte, Samantha and Miranda - gather on screen of another reunion on the celebration of friendship and life, the 2 hr and 25 minutes movie does not in any way disappoint.

Alright, so the plot was thin. Two years after Big and Carrie marry, it was time to review the lives of the 4 girls. Behind all the glitz and glamor of fashion and extravagance, is the shallow plot of happiness and the road couples take in search of it. It may not have been as heady as the first installment of the movie, but it got the message through.

Where is the sparkle now? While the central character of Carrie has been the prime mover of every Sex and the City story, this second installment of the franchise movie has graduated to integrate the lives of the four women in the most hilarious and believe it or not, fun way. Way too cool, way too funny and way too sexy.

It's an adult comedy film that literally was a feel good movie. The first few minutes of the film rewinded to the exact paths where and how Carrie, Samantha, Miranda and Charlotte became the best of friends in New York City. It then fast forwarded to their lives today, where their lives have literally changed from searching for opportunities and breaks to finding themselves in their own comfort zones.

But Samantha's role as a 52 year old menopausal "bitch" in heat was the central humor and tacky delight to the movie when the girls get invited by Samantha, who got invited by a rich sheik, on an all paid first class vacation to Abu Dhabi. From the first class service on the airline, to individual private limousines and butlers, to a $22,800 a night suite in a resort oasis in the middle of the desert, the jaw-dropping, eye-popping, grand and glamor life of the rich and famous was a sight to behold and envy.

Wishful thinking is all I could dream of while watching the movie!

But the ironic twists because of hormones gone wild or of love once lost and found again or of two friends confessing to each other their problems over alcohol drinks that served as an awakening of guilt lost and guilt found became a most entertaining feature of the film. It would have been fun though if the girls had all missed the flight and eventually been downgraded to coach class on their 12 hour flight back home from Abu Dhabi to New York City. That would have been a blast, but I'm sure it would have eaten up another 20 minutes of the raucus in-flight and douse water on the glamorous lives of these 4 women.

The downside of the film is that I thought that Sarah Jessica Parker looked awfully thin and cachectic for a woman in her 50s and that her acting was very much "trying hard". She was playing the role too cute and trying too hard to look and feel like she's 15 when she actually is "over the hill". I probably expected more from this multi-awarded actress and it looked a bit odd that she was all giggly throughout the film. Aside from that, the acting was generally good to great, especially with Kim Cattrall (Samantha) who was delightfully hilarious, bitchy, and horny!

The gay wedding integrated into the first part of the film with Liza Minelli doing the honors of not only guesting in the movie but providing a song during the wedding was an indication that partnerships are actually not limited to men and women. In the end, you'll find the same story intertwined in the nanny! I thought that was a good way to find a fitting end to such a gay beginning.

So what did I think of the movie?

I thought it was an adult comedy and it was full of fun. Bring out the popcorn, leave behind the kids (and I mean those brats who scream and run around in the movie house the whole movie), bring your spouse or partner or friends or gang of friends, forget all your inhibitions and prude attitude, put off that mobile phone in the moviehouse - and have a great time with the girls. You just might find what sparkles you - again!
Posted by Kid at heart at 10:06 AM