Philippine Mafia in Politics - the Circus is back in town 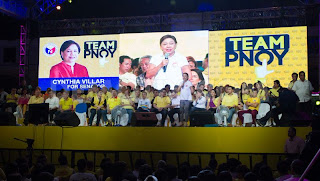 The Philippine politicians (and mundane media people) call our political clans a Dynasty.

I beg to disagree. The right term is Mafia.

The Mafia is a criminal syndicate that emerged in the mid 1800s in Sicily, Italy. Their common enterprise - protection racketeering. Every clan claims sovereignty on a territory where it operates various rackets ranging from money laundering to prostitution. A mafia engages in any illegal financial trade.

With that said, I vehemently disagree with calling our political clans a dynasty. Based on etymological definition, a dynasty is a sequence of rulers from the same family. However, dynasties are akin to affluence, influence, prominence and monarchical in class.

Most of our political clans have no class. Through some devious means, they have cajoled themselves into fame and fortune by using and usurping power through various ways.

The Estradas and Ejercitos are an example. By the power of the sperm of Erap, aside from bastardizing the political scenery, he has even put real-life bastards into political positions. And the restless masses go into a frenetic chant for Erap, Estrada or Ejercito.

Every three years, Philippine politics becomes a cavalcade. It's like waiting for the circus to come to town where the spectators eagerly await for all the clowns, acrobats, magicians and animals to give the best performance of this once in a lifetime show.

This year promises to be a repeat performance for all the mafias in the political arena in the Philippines. And nothing surpasses our show where celebrities and those mentally challenged or should I say, incompetent, have nothing better to boast than their wealth, their family name, their movie accomplishments, their endorsements and other quad media commercials, or that they're in the Philippines' top taxpayer list.

Let's stick to the obvious. Those that run for politics in this country do it not for love of nation but for propagating the spirit of creating a business enterprise where the children eventually inherit the earth, where the businesses in the local government units or the country are run by them or their relatives, where the promises during a campaign are left at that - empty promises. After the election, they go back to doing what they best do - steal, cheat, and lie. They have no cerebral capacity to even run a household but promise to run the senate!

Those who toil day and night and have the BIR check our income tax returns to the last digit (like me) don't even see the taxes we pay at work. The poor are still poor or poorer. The roads are dilapidated. There are more taxes in the form of expanded value added taxes. The streets are riddled with traffic enforcers who don't do anything except run after number coding cars. Public transportation is the pits in this country. It's not really what is right that's implemented but whom you know that gets their individual economies running.

This coming election is just another farcical exercise in futility. Unless every Filipino exercises the true meaning of a democratic election and intelligent electorate, we just go through another three years of some mafia or clown running this country.

In the end, we're actually to blame. Media in the Philippines, in all its true sense of owing it to the public has its own share of conflict of interest. After all, it's the money in the end that matters to all.

And that's why it's time to either migrate or prepare for a revolution.
Posted by Kid at heart at 9:01 PM 0 comments

Narcissism and Kris A.

It's been two weeks since the telenovela drama of Ms. Kris Aquino and the three sisters on ABS-CBN news. I don't know what there was to devote almost 30 minutes of the news show to Kris crying on national television about her spat with her ex-husband. Let me say it - my god - since when was the f*cking problem of Kris' love life even a national issue?

My mom had snatched the remote control of the TV from my hands while we were having dinner. While I was busy watching American Idol, my mother suddenly yanked the TV controls and said, "it's Kris' turn". What the?!?!?!! She said that James Yap had given his side and it was Kris' turn. What the?!?!?! Who the f*ck cared about their spat? Unless they killed each other and sliced Bimby into pieces somewhere in the pantry, I wouldn't give a f*ck with what they did with each other. But my mom had to hear the side of Kris. And while the Aquino sisters had their day on TV - all my mom could say was - MGA SINUNGALING!!!

I wanted to slap my mom silly, but yeah...acting does not befit the Aquino sisters. And why on earth did it even become a national issue that it had to hog the media? Was having sex with Kris by her ex-husband even something worth tackling on national TV?!?! Syet!! If it is eh mamatay na kayong lahat! I guess it's a sign that ABS-CBN is either desperate or the station is sinking fast that it had to gain media mileage through the saga on the life and times of Kris.

This woman needs psychiatric help. No decent person will go through an abusive relationship and dramatizing it on nationwide TV seems to be her past time. Remember the days when she had the spats with Philip Salvador (of whom the have a son, Josh) and then the gonorrhea episode of Joey Marquez? My golly - I believe Cory and Ninoy are glad they're not alive anymore to see their youngest turn out to be such a disappointment. Everything in her life has got to be about sex and her. She needs to be the star in everything she does and even doesn't do. It's not even about her brother the president. It's about her. She fits the Narcissistic personality disorder to a T.

The essential feature of Narcissistic Personality Disorder is a pervasive pattern of grandiosity, need for admiration, and lack of empathy that begins by early adulthood and is present in a variety of contexts. The DSM-IV-TR can be diagnosed if they have five (or more) of the following:
1. has grandiose sense of self-importance (e.g., exaggerates achievements and talents, expects to be recognized as superior without commensurate achievements)
2. is preoccupied with fantasies of unlimited success, power, brilliance, beauty or ideal love
3. believes that he/she is "special" and unique and can only be understood by, or should associate with, other special or high-status people (or institutions)
4. requires excessive admiration
5. has a sense of entitlement (i.e., unreasonable expectations of especially favorable treatment or automatic compliance with his/her expectations)
6. is interpersonally exploitative (i.e., takes advantage of others to achieve his/her own end)
7. lacks empathy: is unwilling to recognize or identify with the feelings and needs of others
8. is often envious of others or believes that others are envious of him/her
9. shows arrogant, haughty behaviors or attitudes

And the media frenzy that went viral (yes viral, because I was shocked that even Jessica Soho jumped into the bandwagon of getting and interview from Kris) and people talking about the latest Kris saga, scandal, and little Bimby caught in between with the three Crying Ladies at the backdrop was like a very very bad movie that we were all forced to take sides - either James Yap was telling the truth or Kris was. I think even the executives at ABS-CBN and GMA7 should also go on a sabbatical and see some shrink to have their heads checked!

At the end of the day, it's the boy called Bimby who's going to be eventually caught in deep shit. He's going to grow up as confused and angry as ever and believe me when I say that karma is such a bitch that it's going to find its way back to haunt the Aquino family.

Sa totoo lang - di na ito dapat pinatulan ng ABS-CBN at GMA7. I just lost all the remaining respect I have for Philippine media. It's a reflection of the priorities of the Filipino people and the Filipino culture. Everything has to be jologs. Everything has to be a telenovela script. We rear not only our children but our citizens based on psychiatrically impaired wannabes.

Seriously? This country has gone to the dogs.

I will not be surprised if Kris will run for government office one day. After all, she will be in good company among those with mental health issues when she joins the government circle.