At mass the other week, the priest told us that he had to attend to two burial masses the week before. The first mass was for a senior citizen who passed away at the age of 105. She died in her sleep at their ancestral and from old age. The priest was astounded at how long she lived. According to her children, their mother who stayed in the province ate mostly chicken, fish and vegetables and did not care about the stressors in life. She raised 7 children in accordance to what they had in the family.

The second mass was for a 40 year old man who kept himself totally fit at a very exclusive gym. He had a discount card to purchase all the supplements and muscle building protein shakes his body could take. He was a top executive at one of the biggest companies and was always on the go. He lived life, literally, to the edge. He collapsed during the workout, apparently had a massive coronary, and was dead right where he juiced up a sweat - in the gym. He left a 10 year old son from an estranged wife.

I remember my grandparents and some of the other senior citizens who grew up in the digital dinosaur age, the latter being a term of endearment from the younger crowd today for those who are not into technological gadgets. Obviously, there are commercials that make "lolo and lola" seem to catch up with technology, but let's face it, as my mom would say - "I don't need additional stressors in life".

Over the last two decades, technological advancement has made the world evolve at an excruciatingly rapidly phase. Mobile gadgets have evolved from touch screen to air shuffling. What was once sci-fi in the movies is now at our fingertips. And while many (if not most) of us are busy exploring the advances in technology and how to keep up with it, back at home it's a different story.

Kids have grown up differently. With all the advertisements and endorsements with the take home message of "buy me" or "you need me", the youth have engaged themselves in more materialistic goods. Being hip and chic with the crowd is cool and sassy. We're all into a wow factor or those being in a situation where we have our "moments". Trending has become the word of the day and "selfie" the pic of the week. Bullying has become a fad, hashtags (#) have become a following. Kids don't use the library anymore. Googling has become an accepted term for searching and "copy and paste" has become synonymous to plagiarism. Where Facebook is not just a fad but a must. Where "twitting" is your daily shout out and "Siri" is now your secretary on the go.

I grew up in the era of transition.

Where my childhood years were spent running in the beach or walks along Roxas Boulevard. Where birthdays would be a frugal celebration with my family. Where a surprise gift would be a spankingly new book to read or a set of Matchbox cars. Where watching a movie would be one of the best treats to a holiday. Where a new shoe or school uniform would come every other year.

As I hit college, the transition began. By the time I finished med school, technology had taken over. There was the beeper from EasyCall and the malls were finally booming at a rapid pace. Glorietta became the hip place to be. SM once a lessee now became a lessor. People began to travel more. The mobile phones came as large gadgets that looked more like war toys than the iPhones we have today.

Thirty years have passed since I graduated from med school. And the times have quickly changed. Not only the landscape of treatment in medicine but even in the academe. Today, each student has access to the internet and must be technologically savvy or is left behind. And the gears they carry include unlimited surfing with an android phone, a tablet and a state-of-the-art laptop. Some of the younger, more techie professors try to catch up with their students, who, definitely are a mile ahead of them in terms of technology.

The malls have sprouted in every nook and cranny of the metropolis and dormitories are now chic, boutique looking, spic and wifi capable. Where fast food junk has become the staple food and commercialism of every occasion the rule.

Patients who come in are now armed with more information at the palm of their hands - sometimes, more than what the doctor can handle. And with HMO care, some doctors rush to see patients in less than 60 seconds.

Life has become one hurried, harried, phase in our lives. Many have forgotten the meaning of making a life because they're more engrossed in making a living. With only 24 hours a day, many of us want more time.

More time...we toil to make more money so we can satisfy our material wants. As a friend of mine would say - "luho". And when materialism gets the most out of us, we become different people - much like a Jekyll and Hyde. Many spiral out of control. The more we make, the more we want. And the vicious cycle becomes disproportionate to the lives we were meant to live. In the equation of making a living, some of us learn to even question religion and drop God from the equation. There is no Sunday mass any longer. We make time for beautifying our skin or dumping money for a make-over but leer at the poor boy who sells "sampaguita" in the rain.

I've had really bad days in my life. For those who know my life story, I've had some of the worst days.

But I've had better days in my life as well. It's the bad days that keep me grounded to simple living. That money is there to earn but it is also there to spend. That materialism will get us a shot at fame, but at a price we dearly pay for.

If you took the time out to read this quite lengthy blog, you should have spent about 5 minutes going over what I said. Take another 5 minutes and reflect on your past and compare your life today. Then take another 2 minutes to hug your mom, dad, wife, husband, children or significant other for a minute and say how lucky you are that they are part of your life.

Those, my friend were the best 12 minutes of your life. And if you liked the 12 minutes spent, think about how far simple living would bring you.

[photo from livesimplechicago.wordpress.com]
Posted by Kid at heart at 6:51 PM 0 comments

Business ethics: The case of SM and the Philippine Government


Sy family to Sec. Abaya: You can build the common station anywhere, so long as it's named 'SM' 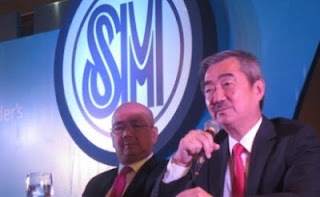 That was the headline on interaksyon.com. The issue stemmed from the building of the common station of LRT1 and MRT3 where SM North Edsa would be the common terminal for the metro train stations in Metro Manila.

Transport Secretary Joseph Abaya said that the government had decided to "ditch SM North EDSA as the common terminal for the Metro Rail Transit 3 and Light Railway Transit 1" after Hans Sy, son of business tycoon Henry Sy and President of SM Prime Holdings had said that the terminal should not only use North EDSA as the name for the common station, but must carry the symbol of SM as well. This, after SM had also given the government P200M ($5M) for bragging rights for the station's name. The station would also serve as the connection to MRT7.

This is a good case for business ethics in school. To some, it would probably mean that the Sy's seem greedy at promoting their company's name and emblazooning the name of the company at the station meant that it would be promoting it's company for business purposes.

But here's the flip side of the issue. The Sy's have recently been cited by Forbes Asia as one of the top philanthropists in the country. "John Koppisch, senior editor of Forbes Asia, was quoted in the report as saying that they picked only 'true philanthropists who are giving their own money, not their company’s because donating shareholder funds isn’t charity.'"


"The magazine cited Sy for donating $7 million to De La Salle University to build an eco-friendly building and $112 million to an unnamed foundation. Sy is the founder and chairman of the SM Group of Companies that is engaged in retail, shopping malls, banking, hotels and property development."

Many schools and institutions have buildings named after major donors. UST for example has three buildings named after donors - Tan Yan Kee Building (a donation of tycoon Lucio Tan), Alfredo Velayo Building (housing the college of accountancy, and the Angelo King Auditorium in the Benavides Cancer Institute. De La Salle University itself has a whole building donated by the Yuchengco family and is called the Don Enrique Yuchengco Hall. Ateneo de Manila houses the Eugenio Lopez Jr. Center for Multimedia Communications, John Gokongwei School of Management Business Accelerator, Ninoy and Cory Aquino Center for Leadership, Ricardo Leong Center for Chinese Studies, Konrad Adenauer Asian Center for Journalism (ACFJ), and the Governor José B. Fernandez Ethics Center for Business and Public Service. These are but a few examples of donors whose names have been affixed to what they donate.

So here's the rub - what was so wrong in having the common station at North EDSA renamed to SM North EDSA?

We all know that these tycoons have provided food on the table by providing jobs, schools, and other philanthropic work through what they have earned. Something that is palpably lacking with government. The taxes we have paid our government that should be translated to the masses are inevitably visibly lacking. The donation or "bragging rights" the Sy's have extended to the government in building the common station at North EDSA on the property of the Sy's would certainly go a long way in terms of public service programs.

However one puts it, I always say that "beggars can't be choosers". The government should reexamine why, in the first place, it accepted the P200M before deciding to "return" the money of the Sys. The ethical dilemma here is a two way street - and government must justify whether the decision is one of conscience or of ego.

Ego will never feed a nation where 70% of its people live below the poverty line.
Posted by Kid at heart at 6:40 PM 2 comments