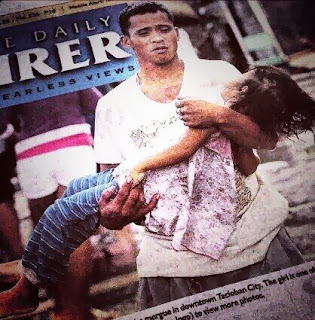 "Criticism may not be agreeable, but it is necessary. It fulfills the same function as pain in the human body. It calls attention to an unhealthy state of things." - Winston Churchill

Typhoon Yolanda arrived in the Philippines last November 8, 2013 leaving a trail of massive damage beyond proportions. Perhaps I will underestimate the tragedy if I say that this wrath of nature changed not only the landscape of many cities and provinces in my country, but their lives as well. As many of us in Metro Manila stayed glued to the onslaught of the typhoon, I guess most underestimated the strength of this storm. Local media had not captured how horrific the storm was until ANCs Atom Araullo could not be contacted and neither could anyone from the President's men who had already been sent to Tacloban.

If there was anyone who said that we were prepared for Yolanda, it was the president himself. The night before the storm, "President Benigno Aquino III on Thursday assured the public of the government’s readiness to face supertyphoon “Yolanda” which will directly hit Samar and Leyte at midnight. Aquino said in a televised speech that the country’s C130 aircrafts are fully mission capable to respond to those in need, adding that 32 airplanes and helicopters from the Air Force are on standby together with the Philippine Navy’s 20 ships which are positioned in Cebu, Bicol, Cavite and Zamboanga. He said that relief goods are also pre-positioned in many of the areas expected to be affected by the supertyphoon. Disaster Risk Reduction and Management Councils, both national and local, have also been activated to mitigate the effects of the typhoon." [http://newsinfo.inquirer.net/522661/aquino-ph-ready-to-face-supertyphoon-yolanda]

It turned out that we were not and someone had to take back his words. The blame game followed. During a press conference immediately in the aftermath, PNoy had shifted the blame on the local government units in Tacloban. Tacloban is the bailiwick of the Romualdez, one of the richest political clans in the country and relatives to former first lady Imelda. In his disgust, he had walked out of the press conference in a huff and puff and typical of what he usually does when faced with frustration.

When media had eyes and ears on Tacloban already, we knew that help in whatever form, if it came, would be too late.

A part of me died that day. Tacloban has always been close to my heart. This is where I grew up the first six years of my life. I have friends and distant relatives and from where my family and I were in Manila, watching the news and trying to get in touch with loved ones was futile and agonizing.

While local media scrambled to get accurate news on all fronts, foreign media, in particular CNN had been at ground zero from the get go. There were mixed reports on casualties and what was left of Tacloban City after Haiyan (Typhoon Yolanda) exited the Philippine Area of Responsibility the following day.

Technology played a vital role in the relief operations for the people who were affected by recent calamities. Twitter and Facebook were abuzz in asking people to help our brothers and sisters in the Central Visayas area. It is undeniable that social media played a pivotal role in disaster management and in the operations after the carnage. It is undeniable also that social media has been and is being used for both good and bad intentions even during a calamity like this.

Postings on what allegedly transpired or did not happen became the trending topics. It was obvious that we did not need to add to the chaos but that's the reason why technology is called Disruptive Technology. And while there are good intentioned people, there will always be bad. But that is what social media is all about. We either live with it or get the hell out of it. I'd rather take the brighter side of life and say that social media is one of the best tools invented because it not only became an instrument for communicating with those who were affected by the typhoon but because it was used intelligently to pan out to the world on the disaster in the Philippines and how the world responded to our cry for help. Seriously, we could have never done it alone. 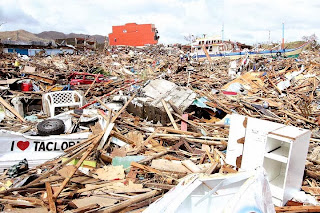 It's 10 days after Yolanda devastated my country and its people.

What lessons have we learned from this?

1. We have no disaster preparedness program in place. It's all lip service but if you look through the budget of the Philippines, it's zero. PNoy vetoed disaster preparedness budget in 2011 and left disaster preparedness to local discretion and as part of local calamity funding. I guess when it becomes a national problem as in this case, then the national government is really unprepared. Let's cut the crap on saying that "NO ONE IS EVER PREPARED FOR A DISASTER LIKE THIS." An earthquake I would understand. But a typhoon? Get real. We get it year in and year out. We just weren't ready for something as strong as this and we underestimated nature. The president's hullaballoo on preparedness was crap. When we needed the C130s and planes and helicopters and ships, we were caught flat footed. When foreign ships and aid came to the rescue, we found out that this country has a paltry army, navy and air force. We need to face reality and the truth eventually comes out. No matter how painful it is, we need to swallow our pride. At the end of the day, the thousands of lives that could and should have been saved had pride not taken precedence would be a more decent approach to caring for your countrymen. [http://www.interaksyon.com/article/14493/pnoy-vetoed-disaster-preparation-in-2011-budget]

2. There are opportunists in our midsts. The painful part is that many of them are in government. Calling them insensitive is too kind. They are like are vultures who circle even the living, waiting for us to die. Take the example of the BIR commissioner who said that "The Bureau of Internal Revenue (BIR) on Thursday clarified that relief goods both from here and abroad for the victims of monster typhoon Yolanda (international name Haiyan) will be spared from tax as long as it is coursed through the Department of Social Welfare and Development (DSWD) or accredited private foundations." Ms. Henares was quoted as saying that this was meant to curb people who would take advantage of this calamity to claim donations for and on behalf of the calamity later on. [http://newsinfo.inquirer.net/527239/bir-wont-impose-tax-on-relief-goods-if-coursed-through-govt-agencies]


This did not sit well because essentially all the goods we buy for donating it to the typhoon victims already carry a 12%VAT at the cash register in the supermarket counter. Why do we need to get taxed doubly? So if we called a spade a spade, perhaps it would be a good reminder that prior to this devastation, another devastation had just hit us in the form of Janet Napoles (remember - the bitch and the typhoon had arrived simultaneously). This is where our taxes went. This is where government officials were enriching themselves. Had these been addressed from the get go, my beloved country which is mired in so much corruption would have a definite road map to recovery.

It's a fair reminder that if you like to help, help. But don't stand in the way of those who want to help. And calling its citizens "thieves" isn't helping any. Perhaps our government officials need to look closely at themselves in the mirror before they look at its people.

3. There is no single hero in a calamity like this. Big or small, every relief effort, every single donation is a step to a greater good. It is expected that those who have more in life share more of their blessings, but those who have little, and yet who have spared their small change are big heroes in my heart. It becomes irritating that there are politicians or media men or even church officials who act as if they were God-sent. Repacking relief goods under the guise that you gave it yourselves or even if you gave it yourselves is not in good taste. During a crisis like this, there is no "I". Every effort begins with "We".

It was uncalled for to be exchanging barbs with foreign journalists who had only good intentions in alleviating the sufferings of our people. Dapat ba parating may bida sa bawat sakuna?


4. The Filipino people are resilient. I take great pride in being a Filipino. Living in a country with 70% of my fellow men impoverished has taught me that behind the hardship we go through and in spite of all the tragedy we live through day in and day out, we learn to rise above it all. Our dignity may be scarred but it will remain intact. Our bodies may be broken but our spirit will always rise above every occasion. I have friends who have migrated to land of more verdant pastures. They have better lives today. But they will remain Filipinos in their heart. They understand what it is like to live in a country that in spite of our limited resources, learn to make it through the toughest of times and celebrate the best of our successes as well. 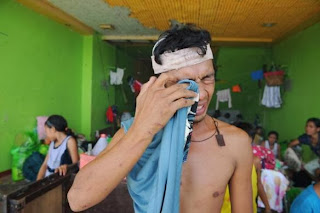 Today, many of us will bury our dead.

Tomorrow, we rebuild our country - from sand to rubble and brick by brick we will rise to rebuild our hopes and dreams. There will be scars in our lives and we will all have our stories to tell. 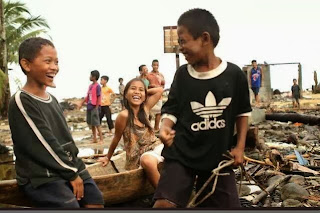 But the story that will be remembered most is that we are a proud nation that is grateful for all the help from other nations who are determined to help us rise from the storms of our lives. And rise we will, for tomorrow is another day.