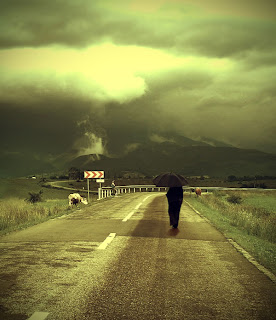 I was watching an episode of Private Practice the other night.

The series featured the plot between life and death. A baby born with diaphragmatic hernia where an immediate surgical procedure would be needed. A matter of life and death. But the baby was being delivered to a mother who had already decided that the baby would be given up for adoption. And she refused to decide on the fate of her baby and would leave that decision to the adopting parents. But the adopting parents had opted not to adopt the baby. Which left the plot requiring a resolution.

The most touching part of the episode was the doctor who was dying of pancreatic cancer. On his last days, he wanted to just go home to die. Two colleagues were there to provide him company and comfort in his last few days. He had little options, and he wanted to die.

The "assisted death" was one of the most moving scenes I ever saw. When the doctor had injected himself with a large dose of morphine, he was more than willing to die. Then at the brink of death, he began having second thoughts. It was then that he expressed to his colleagues how lonely he was. And how it terrified him to die - alone. And that he wanted to live. He begged for another chance. Dying alone was his greatest fear.

One is such a lonely number.

It is my most feared scenario as well. At the end of the day, when I crawl to bed, I feel the loneliness seeping in.

Many of the escapes we have in life provide us the temporary exit out of the myriad of problems we face each day. Going on a vacation, changing jobs, moving to far away places, changing partners, buying things - often provide us the "distraction" from facing real life decisions and ending up with "peace of mind".

The greatest step we make towards sanity is facing life the way it is presented to us. Full of challenges and yet disappointing. An escapist life is not fulfilling. You only run away from problems and end up losing yourself in the process.

Wherever life takes us, we cannot live regretting that we could have made it right, when we were given the opportunity to. There may be misgivings and heartaches, indecisive moments driven by past hurts and pains, but nothing falls short of realizing that it can be resolved by a simple text message or a hand of forgiveness and reconciliation that is just within our reach. Even if it means having to swallow our pride, we did our part.

We do not need to be alone.

Let me share with you (even those who are non-Catholics), a short prayer I say each morning. It has become a ritual, but it has helped me through the best and worst days of my life. You may want to try a little prayer. Each morning as you start your day, in the solace of your home, instead of being ALONE, whisper this prayer.

It is "peace of mind" for free!

"Dear God, as I begin this day, let me turn to you and ask your help in everything that I say and do.

Give the patience that I need to keep my peace of mind, and with life's cares, I hope, Dear God, some happiness to find.

Let me live but for today, not knowing what's ahead, for I trust that you will see, I get my daily bread.

Give me the courage to face life's trials and not from troubles run. Let me keep this thought in mind, Your will not mine be done.

And if some wish I do not get, though I have prayed to thee, let me keep in mind, you know what's best for me.

I've failed you many times I know, but when tonight I rest, I hope that I can kneel and say, dear God, I've done my best."