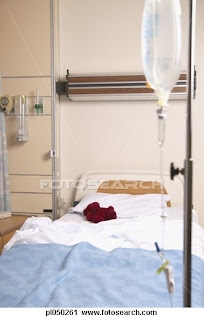 I have a friend who's dying.

At the prime of his life, he has been diagnosed to have cancer. Non-smoker, non-drinker, a family man - good provider, husband and father. It started as a bad cough. It must have just been a cold that wouldn't go away. In a recent trip abroad, the symptoms worsened. He experienced difficulty in breathing.

A few days after his return, the cough worsened. His wife was worried but he didn't get to see a doctor until he collapsed at work.

At 30 years old, it was a shock to his family that he was diagnosed to have lung cancer. There was bone metastasis already.

The doctors and family huddled together to talk about chemotherapy, radiotherapy, and surgery. The prognosis was poor, but technology was advanced. They could prolong his life and the new protocols for this type of cancer were promising.

Ironically, he was not asking about the treatment protocols.

He was asking why him?

Then tears began to flow. Normally, my talkative self would give a lot of heart warming advices on being strong, putting yourself together, hang in there, fight for your life and all that rah-rah perk up your spirit talk.

But he made sense. Why him? All these talk about treatment protocols and options would only prolong the agony, not to mention the financial burden it would put on his family. The truth of the matter is - science cannot explain everything. And science cannot have a solution to everything.

Truth be told, the prognosis was grim. Even with the new protocols, the chance for survival with metastasis was less than 10% for 6 months.

He comes from a well-to-do family. And they can afford the treatment protocol. His parents were at his bedside, providing encouraging words. That it would be alright. That this was simply a setback. The doctors were explaining the treatment regimen to him.

He simply looked away. He was staring at space and at the blank walls.

My friend has never left the hospital, a month after his diagnosis. He has undergone chemotherapy and radiotherapy. When I went to visit him the other day, he was all shriveled, pale, and gaunt. He was hanging in there.

He gave me a smile, a tear, and I couldn't help but smile back and shed a tear as well.

I told him to hang in there. Take one day at a time. You have come this far, one day more my friend.

He smiled and weakly said thank you. And then replied,