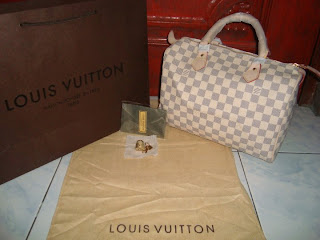 Let me start this by saying "bato bato sa langit tamaan huwag magalit" (stones that fall from the sky, whoever is hit by them, don't get angry).

After this disclaimer, let me go on to discussing an online shop that sells Louis Vuitton replicas.

I was aghast at this.

The temerity of this online shop to put the ad on Facebook!

While I do not undermine the enterprising nature of these people who duplicate original articles, I am strongly opposed to intellectual piracy in any form.

Intellectual piracy should be condoned. If you cannot afford to own an original LV, you do not have the right to own it at all. It does not give one the right to simply mass produce an item just because it is popular so that every one can own a Louis Vuitton bag! Imagine your maid going to the supermarket with you with an LV in tow, right next to your original LV.

There is a putative right to ownership of luxurious items. And owning it, comes with a price. The mere fact that we even flaunt a fake, speaks of how shrewd the Pinoy businessman is willing to get. The only one that stands to profit actually from an industry that mass manufactures replicas are thieves. They steal the original ideas of other artists only for self financial gain. While some businessmen think that there is nothing wrong in making a quick buck, I think it is altogether wrong that one makes money out of other people's efforts and ideas.

To me, it is tantamount to stealing. It is not like any drug that you can make a generic copy. Drugs are a different story because they save lives. As to walking around with an LV bag that is fake, it speaks of how cheap one can be and the temerity to flaunt a fake item! Grade A or grade B or whatever grade you call the replica - it is still FAKE!

And it is not only an LV. There are many name brands that are sold in major malls in the city! The mass production and selling of fakes should be put to a stop. We are not depriving people of anything that is going to affect their health or lives. It is a matter of principle that we encourage the Pinoys to challenge their brain cells to come up with more original concepts on retail business rather than just producing replicas.

Buying a fake is a reflection of the kind of personality you have and you own - fake!

If you do not have the resources to buy an original, I will simply state the obvious - you are poor. Don't try to be what you're not.

And FB must not condone this type of publicity. Facebook must shut down the accounts of those that sell replicas of fake goods online, using this site. It must help stop intellectual piracy now!
Posted by Kid at heart at 1:23 PM