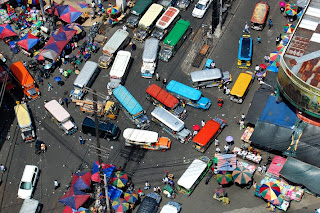 I have always marveled and shriveled at the never ending traffic problem in the Philippines.

I will put it bluntly - the traffic problem in the country is not only a major turn off for foreign investors but is the perfect mirror of the sense of non-urgency of the Pinoys.

I have never understood why this problem cannot be addressed.

No sitting president in the country has addressed this problem.

During her nine years in office, the outgoing dwarf in the palace has not addressed this situation as well. Sure she traveled all over the world on chartered flights and traveled to and from Malacanan without having to go through traffic (though her travels have also been the cause of the horrendous traffic as well).

But why do I want to talk about traffic in the Philippines?

Because traffic here has become a cultural problem. Like many of the cultural stupidities the Pinoys have, traffic is one of those classified as major headache.

Jeepneys, buses, FXs, taxis, and tricycles continue to lord it on the public roads. I cannot fathom why to local governments allow tricycles even in major thoroughfares. All forms of public vehicles (except trains and the railway systems) load and unload in prohibited zones. Even if there is a sign as big as daylight that says "NO LOADING AND UNLOADING FROM HERE TO CORNER", there will always be the Pinoy who thinks he is God or Gloria and will load and unload passengers at will.

I cannot understand why the people in this banana republic have to load and unload where they want to. You see them get off in one area then the jeep travels 50 meters and sanamagan another one gets off then it travels 20 meters and you see another nuthead get off and then after 5 meters the jeep stops because a passenger is getting on and then moves on the next 25 meters only to stop again because the driver has reached the loading and unloading zone. Dang!!! Sometimes you get to feel for the road rage people.

Some say that if you don't have the patience to drive in the streets of the Philippines you shouldn't be driving. I think that is the wrong kind of thinking or mindset. That is an idiot's line of thinking. Discipline is something that is wanting in this country. If you look at it from a microcosm, the traffic situation in the Philippines is the perfect singular example on the matter.

The surge of so many motorcycles in the country has also made the streets a chaos. These motorcycles drivers are probably part of the amazing lot of Pinoys who are able to put a maximum of 5 passengers on a two wheel vehicle. They have their wife and three children riding shotgun in all places on this vehicle and manage to swerve in and out of the roads of the Philippines. Never mind endangering the lives of the people on board. After all, if a car hits them, it will ALWAYS be the fault of the car. The charge? Driving with reckless imprudence leading to homicide (or whatever accident occurs).

There was an incident a few years ago where a man threw himself over the overpass of the Espana pedestrian walkway in front of the University of Santo Tomas. The man landed in front of a taxi cab that was traversing Espana St. The cab hit the guy who "fell from the sky" and the guy died. The poor cab driver was charged with reckless imprudence leading to homicide!?!?!!? Only in the Philippines.

Poverty and being a developing country CANNOT be an acceptable excuse for the sheer lack of discipline in this Godforsaken country. Our bleeding hearts and the senseless pathetic attitude of government officials towards the lack of discipline among the Pinoys on the road (and elsewhere) is definitely nerve-wracking and is a test of patience. Local politicians will always ride on the sentiments of the poor. That we should allow this kind of practice on how to ride public transportation in the Philippines is beyond my comprehension.

I can never understand how Pinoys who migrate to or travel to other countries (aside from the Philippines 7,107 islands) are able to be in their best behavior! My blog readers will attest to this! Watch a Pinoy cross the street in Singapore. They will cross where the pedestrian lane is. Watch a Pinoy cross the street in Quiapo. He is willing to play tag with the oncoming buses, jeepneys and cars and hurdle the cement barrier that is 3 1/2 feet high that divides the left side of the street with the right side of the street and will defy gravity after making that brave cross to the other side instead of going up the elevated pedestrian walkway.

I have never understood why we cannot put a reign on the public transport system in this country.

Most of the people, except for Bayani Fernando and the Metro Manila Development Authority, know that the major cause of traffic in the Philippines in general and Metro Manila in particular is NOT the sheer volume of private vehicles. Rather, it is the lack in discipline and poor quality of urban planning in each of the cities in the metropolis.

Remove every SM mall and you will see traffic decongest by 20% instantly! Every SM mall is strategically located in areas that are accessible to public transportation. Each of these malls are converted indirectly into public station depots because of the large number of people that go to these malls. Remove all the malls (aside from the SM malls) from within each city and you would have added 10% decrease in traffic congestion.

All 10 wheelers (and above) should be banned from the roads from 6am - 9pm. Hindi kasya ang kalsada para sa ating lahat (the streets are not enough for all of us). They should try to make use of the port to port delivery rather than make use of the door to door delivery system. Of course, it will only be those operating the ports that will holler at this idea, but seriously, will it kill them if they only plied the streets of the metropolis during nighttime? It certainly will decrease the number of accidents on the street and definitely the traffic. Most of these old trucks bog down in the middle of our narrow thoroughfares and just ONE ten wheeler causes a humongous traffic that takes hours to unclog and wastes so much manpower and precious time. Decreasing these big trucks will decrease 25% more of the congestion and traffic conditions not to mention the unquantifiable hours lost and gasoline saved for the ordinary Juan de la Cruz.

Then there are the Pinoys who insist on playing tag with cars that ply the highways. You see one Pinoy dashing from one end to the other end with child in tow! We waste so much in taxpayers money building overhead pedestrian lanes which are occupied only by vendors or used underneath by motorcycles when it rains, as a shelter! Gadzooks! And the only one that actually benefited from these structures are the local government officials who stood to make a quick buck from these infrastructures.

And if we only did these, we wouldn't need to have color-coding days! Only the traffic aides stand to gain from this corrupt and inept ordinance in Metro Manila!

There is no sense of urgency among the Pinoys! And if we intend to move out of the third world category, we need to fix this problem NOW. I cannot understand why we cannot walk a few meters so we can provide more convenience to the majority of the commuting public! Is it so hard to understand this?

Patience they say is a virtue. Some may say that I am an impatient person and that I should just let majority of the commuting public do what they currently are doing - violating the law.

I think that over the half decade of my existence, and my having to bear with this stupidity and crazy traffic system and car coding system in the country, I have redefined the definition of patience.

Those that tolerate this system and turn a blind eye to the actual scenario, are not patient. They are masochists. They deserve to be in the banana republic!
Posted by Kid at heart at 9:55 AM