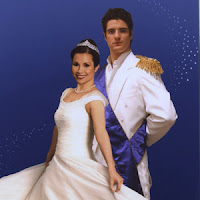 We were all psyched up to watch Cinderella which was for the Asian Hospital Charities last July 30, 2008. I got box tickets for the family and when the curtains rose exactly at 8PM at the Cultural Center of the Philippines, I sat back, relaxed....and dozed off.

Let's look at the positive side of the play. The set and costume design were good. The pumpkin turning into a golden carriage was the highlight of the show.

The downside outweighed the positive sides. The songs were unfamiliar and cheesy. While the stepsisters did justice to being twiddledee-doo and twiddledee-dumb, that's about the evilness they had because they were actually stupid oafs unlike the Disney characters.

Unfortunately for the audience, while Lea can sing, she didn't fit the role of Cinderella to a tee because of her height. I do not mean to be mean, but let's face it, everything can't just be about the voice. You need someone who not only can sing but must fit the role to a tee. Lea looked like one of those Filipinas that go off and marry a foreigner who's so attracted to Caucasians because of their wealth. And prince charming looked like a rice king.

The script was dragging. And it was boring. Zzzzzzzzzzzzzz......

Was it worth the buck? If I were you, I'd just go ahead and buy the Walt Disney version on DVD and watch it. While Lea Salonga sings well, she doesn't fit Cinderella to a tee and that in itself made the whole play a disaster.

The consolation is that at least I donated to charity.
Posted by Kid at heart at 11:21 AM