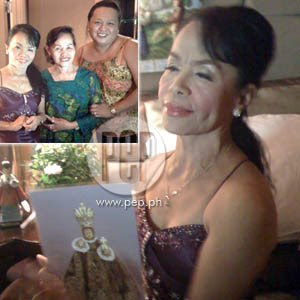 I blogged about my mom whom I fondly call Inang last year.

This morning, after greeting Inang a Happy Mother's Day, I chanced upon an article on the Philippine Star featuring Mrs. Dionisia Dapidran, mother of boxing icon Manny 'Pacman' Pacquiao.

She had two children with her first husband who abandoned their family. Later, she married Manny's father. After having 4 more children with him, he abandoned the family as well. Aling Dionisia knew poverty like many Filipinos who strive to make ends meet and 6 mouths to feed and had to shelter them. She sold fish crackers, did odd jobs to put on the table and as the oldest boy, Manny did his share - selling cigarettes, bread, iced water and doing laundry.

The family was so poor that they slept on cardboard boxes in their shanty. Deeply religious, Aling Dionisia put her who fate and faith in God. The woman's faith never waivered, as she asked that God somehow provides a better fate for her children.

In 1994, Manny left General Santos on a slow boat for Manila. He started off as an amateur fighter known as Kid Kulafu. In his early boxing years, he augmented his income by working as a gardener, carpenter, and was paid P200 to accompany basketball star Asi Taulava jogging around the Cultural Complex in Pasay City. All the money he earned, he sent home to Aling Dionisia.

That was yesterday. The rest is history...

Today, Manny Pacquiao is a self made superstar. His humble beginnings and the amazing journey of his life is inspired by a woman who did not waver in spite of the hardship that befell her. Unlike others who strike it rich by winning the lotto, Aling Dionisia is rewarded with her children's success. To her, that is what matters most and she is doubly blessed with not being selfish. Her stellar role as a mother comes most inspiring, particularly on occasions like this.

Incidentally, Aling Dionisia celebrates her 60th birthday - with a bash - on the 15th of May!

The other day, I received a text message that went like this:

I thought it was nasty joke. I have two words for those that spread this text message - MGA INGGITERA!!!!

Thank you for you enlightening discourse. I've had a few people comment on my saying that Aling Dionisia was an iconic figure. I just really see things differently and people don't even respect THAT in itself. I feel like I did something wrong. Thanks again:)