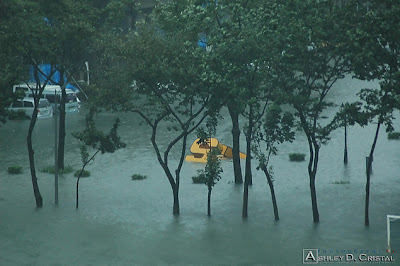 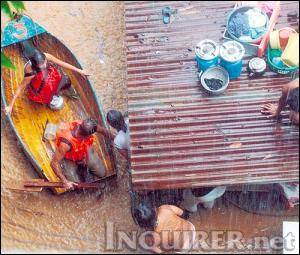 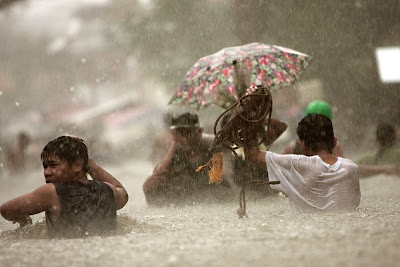 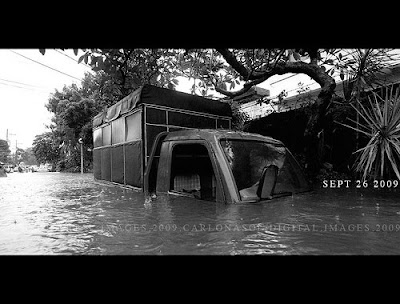 Last Friday, CNN had announced the arrival of Ondoy. In the local news that night, both TV Patrol (Ch 2) and Saksi (Ch 7) casually talked about the arrival of Ondoy. But the rains started pouring that night. I woke up early Saturday morning to listen to news reports on the location of Ondoy. Turning on my TV to listen to the news, Julius Babao and wife Tintin were just cheerie and yacking to death about the headlines discussing about the impending radio frequency stickers for cars. Babao called on all to wake up with his baritone voice screaming "GISING GISING GISING"!!! Umaga na". I was waiting for some news of Ondoy while I got dressed for classes.

I teach the graduate school on Saturdays and as I quickly got prepared for classes, I was worried about the rain. The clouds were there and the sky was getting darker. I asked my driver to turn on the radio, but there was no news of Ondoy.

In the middle of my class, around 930am, the secretary of the graduate school announced that due to the rains, classes were being suspended at 11am. My students and I looked out the window and knew that Ondoy had made his presence felt already.

After seeing a few patients right after my class I immediately left the university. By that time, we were already Waterworld. Every nook and cranny, every road and side street, every walkable pavement was simply eradicated in just 2 hours of non stop rain. And it poured and poured and poured for the next 4 hours more.

This was one of my most unforgettable day. When mother nature strikes at the core, you realize your humanity and a tragedy like this does not delineate the rich and the poor. You realize that the guys who are wading in the flood waters in skimpy underwear all soaked are not different from your dry clothes waiting for the flood waters to subside. I was hungry and tired. I picked up my wallet and noted that not even my Visa or Mastercard or the cash in the wallet was going to make a difference between me and the young children swimming in the flood. One guy was busy plying water, Ovaltine and junk food, clearly taking advantage of the calamity. My driver had jumped to the nearest Jollibee as we were stranded in stand still traffic. There was no more food. They were closed at 2pm.

As I looked out the windows of my car, I was humbled watching the people on the streets because they were free to wander around and wade through the water without any care in the world. They were making the most out of the worst scenario, while I was imprisoned in the confines of my car - miserable, hungry and tired.

After 4 hours, our car had moved 10 meters. Probably the flood waters had pushed the vehicles forward. Night time had arrived. A few meters away from our car were delivery vans for San Miguel Beer. Young men in states of undress were climbing up the back of the van and carting away cases and cases of beer. It was dark and the workers of the van had given a chase, but after several cases had been stolen. Up front you could see the despicable low lives of the people living around the San Andres area. Where was a cop when you needed one? Where were the MMDA traffic enforcers when you needed them?

Ondoy had come and gone. I had to experience getting stranded in 15 hours of traffic to come to grips with reality - that in the worst of tragedies, we are all the same.

Typhoon Ondoy left lessons imprinted in both the strong and the weak, the rich and the poor. The Philippine government officials and media had a heyday finger pointing at each others underestimating the supposedly "weak" storm. Let's face it. We were all unprepared. Complacency is man's greatest tragedy. We never learn until we come face to face with calamity. Perhaps we simply brush many things aside when it affects only the poor. But when it affects even those like us, we realize our vulnerability.

I shared some cookies and candies and some water with my driver during this 15 hour ordeal. When we were able to get through the traffic, we had a hearty early morning dinner at 3am at a 24/7 ChowKing outlet near our home. Hungry and tired, we shared a meal together with my partner who had come to meet me to find out if we were alright.

When we got home, I told him to go home to check on his family and thanked him.

It takes a calamity to humble us.
Posted by Kid at heart at 10:51 AM