Is the party over?

Jessica Soho's 'State of the Nation' TV news show had editorialized the age-old dilemma of the relationship between the physician and the pharmaceutical company.

The following day, several newspapers had featured the press release of the PHAP (Pharmaceutical and Healthcare Association of the Philippines) on this entanglement between the industry and the doctors.

The press release, which I think should NOT have been released and was done in very bad taste by PHAP through its President, Mr. Reinier Gloor (a former executive of Zuellig Pharma Corporation - a distributor for pharmaceutical products) focused on two evils - the DOCTOR and the INDUSTRY. 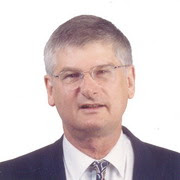 First, let me point out that I have nothing against policing entanglements between the physicians and the pharmaceutical industry, I just think that the PHAP is not the proper organization to trump the say-so in having to police the rank of the industry. Fine, so the 44 pharma companies under the PHAP umbrella are banding together to rid the industry of the so-called "corrupt practices' of bribery and influence in prescribing habits by peddling under the guise of junkets and free gifts or rebates to doctors.

What I am peeved about is that the doctors who are the recipients of this are made to look like crooks. Well, yes, so there are some of us in the medical profession who have sold their souls to the devil and have no ethical boundaries. That's a given. What's strange is that the same people who have formed PHAP and bounded together in the fight against this abusive practice are the same idiots who created the problem in the first place!

It's not a chicken and egg scenario. The early years of the pharmaceutical industry saw a boom in business via prescription peddling through backdoor channels - a trip to the Swiss Alps here, a tour of Honolulu there...a gift basket here, payment for convention registration there...

Seriously? My early formative years in medical school and then in residency training made me realize that the pharmaceutical companies were willing to bend over, and yes, even dance on their heads - in exchange for a prescription. I saw this most blatant display of commitment by the pharma players in the milk companies! Talk about milking a cow dry - the Philippines should make it a capital punishment to be even endorsing milk products (but hey, Kris Aquino is an endorser so I doubt if PNoy would even blink before considering this). 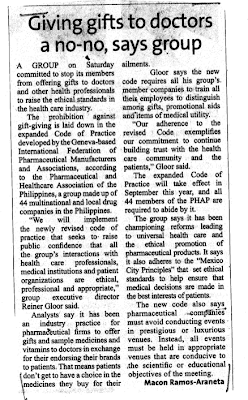 I cringe at the fact that I have colleagues that literally ask OR beg the industry for trips and gifts. Mind you that this was not only in the Philippines but in the United States as well! But the carrot was put in front of the rabbit a long time ago. Cognitive psychological impact on the behavior of doctors was altered the day the doctor stepped out of medical school and began his medical practice. The dilemma of the pharmaceutical companies coercing the physician on entanglements was NEVER taught in med school. It became an intricate web that the physician had to fight over (like good and evil in the Garden of Eden) in his heart and soul with the pharma devil placing the temptuous apple in front of the doctor.

Finally, is the fact that this statement of policing itself is only true for pharma companies under the banner of PHAP. There are several key players in the local pharma business that are NOT under the PHAP organization. Which means that the PHAP members are simply restricting themselves and it's really not an all out effort to curb the ethical conflicts of interest between the doctor and the industry.

In short, as long as this is not a government initiative there will still be sponsors for the merry making to continue. Whether it is without Astra Zeneca or GSK or MSD or other big name companies - it's not going to matter. The party will continue until government steps into the bigger picture to ban the parties forever!

In the meantime, Jessica Soho can eat her shorts for all I care!
Posted by Kid at heart at 12:48 PM

The biggest pharma company in the country is not a multinational, it's local, a generic manufacturer. Annual revenues of UL is about the same, if not larger, than the combined sales of #2 GSK, #3 Pfizer, and #4 Wyeth or Sanofi or MSD, I forgot.

There are 2 federations of pharma companies here, PHAP and PCPI. PHAP is mostly multinationals, 44 members according to the article, PCPI has about 120 member companies, mostly or all local, including drugstores. PHAP has a code of ethics, PCPI has none. Disclosure: I have friends in both groups, the heads of PHAP (Mr. Gloor) and PCPI (Mr. Beau Agana).

About drugs promotion, I wrote something about it, during one MeTA Philippines forum, http://funwithgovernment.blogspot.com/2010/09/drug-promotions-and-government.html