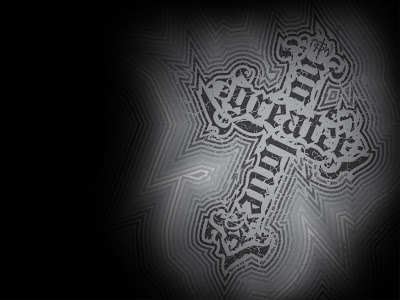 There's the story of a young boy and his parents.

As the boy grew up, he and his parents struggled with his growth pains, as every family would realize in raising children.

During the next week or so the boy came home on time. Then one day, he came home late at night again, this time much later than he used to. His mother was furious when she opened the door and gave him the cold treatment. His father was seated in the living room in silence. They all proceeded to the dinner table. His stomach was grumbling and the scent of a freshly cooked meal permeated the air. When he sat down he noticed that the plates of both his parents were filled with delicious food. And he saw that on his plate was a piece of bread with a glass of water on the side. And his face fell and he knew it was his punishment.

After a few moments of silence, his father stood up, took his own plate filled with food and swapped plates with the boy. Tonight, he was taking the punishment for his son as his own.

There's always a story of an act of love that surpasses many "I love you" we share. Love is not about giving the most expensive jewelry or fanciest car. It's the little sacrifices and it's about dying a little so that someone else lives better lives that make a difference.

I remember when I was growing up, my mother used to buy ripe yellow mangoes for me and my sister. Because we didn't have much money to go around with, whenever she would serve us the mangoes, she would slice it into three parts - the two faces with the seed in the middle. She would give the best parts to me and my sister and she would suck on the middle portion of the mango. And she would be contended with having sips of the succulent fruit.

I guess in our lives, we have had someone who has given us no greater love in their own small way. Often times, we miss seeing the big picture because we're often engrossed with ourselves and sometimes our pathetic personal wants and needs.

There will always be a bit of Jesus Christ that dies on the cross to save us from the bigger crosses we bear.

For just a few minutes in your day, have you taken the time to sit back and reflect on the people who have given you no greater love?

Think about it, and thank them for it. Because when they're not around anymore, you'll regret the day you missed the chance to say "thank you" for loving you during the worst days of your life.