The arithmetic of joblessness 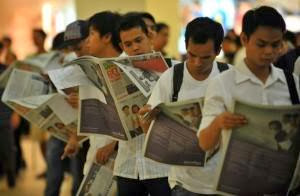 The Social Weather Station (SWS) of the Philippines recently came out with data claiming over 13 Million (13,000,000) Filipinos are currently jobless.

I was startled at the numbers! Not only is it indecent, but it spells that the country is in deep financial shit.

I say this because if I do simple arithmetic using the operations called multiplication, division, addition, and subtraction - the numbers just did not make both mathematical and logical sense.

Let's do the math.

Estimate that the current population of the Philippines is 100,000,000 (100M). This should include the total number of Filipinos living here and abroad.

Approximately 53% are less than 18 years old. Which means an approximate figure of 53,000,000. Unless we are into child labor, we need to simply deduct that number from the total population, and it gives us an estimate of 47,000,000 (47M) employable Filipinos.

According to the census.gov.ph, approximately 2.2M (2,200,000) working Filipinos are OFWs (Overseas Foreign Workers). That makes 44.8M employable Filipinos in the Philippines.

Based on estimates, about 10% of the total population are senior citizens (compared to the 6% in 1995). Which means that about 10M Filipinos are over the age of 60 and it would be a fair estimate that only 50% are now gainfully employed or part of the labor force. That leaves about 5M Filipinos less from the 44.8M employable Filipinos in the Philippines, or a total of 39.8M (39,800,000) currently employable. Deduct the 13M unemployed and you have 26.8M employed Filipinos left.

With the data provided by SWS, this means that the rate of the Filipinos living in the Philippines now stands at 33% (13/39.8). That is a damn high number. The probability that you won't get employed in this country is 1 in 3. That's bad economics. Worst of all, when you can't do the math correctly, it's bad arithmetic.

"The SWS data on joblessness refer to the population of adults in the labor force. This is because respondents in the standard SWS surveys are those at least 18 years old. On the other hand, the official lower boundary of the labor force has always been 15 years of age.

In the SWS surveys, persons with jobs are those who have a job at present ("may trabaho sa kasalukuyan"), including unpaid family workers. The question does not use any past reference period.

The SWS joblessness figures are consistently based on the traditional definition of joblessness as fulfilling two requirements: without a job at present and looking for a job. Those without a job but not looking for one are excluded from the labor force; these are housewives, retired, disabled, students, etc."

"On the other hand, the official Labor Force Survey definition of employed include all those who, during the week before the interview date, are 15 years and over as of their last birthday and are reported either:

a. At work. Those who do any work even for one hour during the reference week for pay or profit, or work without pay on the farm or business enterprise operated by a member of the same household related by blood, marriage or adoption; or

b. With a job but not at work. Those who have a job or business but are not at work because of temporary illness/injury, vacation, or other reasons. Likewise, persons who expect to report for work or to start operation of a farm or business enterprise within two weeks from the date of the enumerator's visit are considered employed."

I guess whether you were looking at it from any administration (Arroyo to Aquino), global economics had played a role in the unemployment rate not only in other countries but in the Philippines as well, with more females being unemployed to date, than males. The stupid idea alone of having women who become pregnant later on be allowed a 6 months leave of absence is not being sexist, but being idiotic! Who in his right mind would even hire women at all if such a law existed?

And if you broke the segments by age, the chances that a new graduate would land a job by the time he or she finishes school would be 1 in every 2 graduates!

The startling data is not much different from many other countries worldwide. It is, however, sad news, considering that the Philippines has a very large young population and that we are a developing country.

With these constraints and this data, there needs to be action from the government - and the public learning to bite reality because this is as real as it gets.