My annual vacation destination this year too me to five countries in Europe - Vatican, Italy (Rome and Florence), Monaco, France (Nice & Cannes) and Spain (Barcelona). The whirlwind trip was to last 11 days and 10 nights.

This vacation was something I had looked forward to. And unlike previous vacations, this had its highs and lows.

I decided to write about the lows in the first part of this two part blog.

On board our train (Trenitalia) on a platform change in Milan (on our way to Monaco and France), I was robbed.

Yes. Like many other people who have been violated, my passport, wallet, money, bag and a few memorabilia were taken from my carry-on bag.

It's not my first trip to Europe or Italy for that matter. This year, my partner and I decided to just enjoy the much ballyhooed EuroRail in order to appreciate more of what a European vacation had to offer. On board the train, while we were trying to get settled in, there were two women who were arguing over seats. Obviously, they were our seats as indicated on our train tickets. One of the women claimed she had to seat number on her ticket because it wasn't indicated on her ticket. Another woman was arguing with her and then two men passed behind our backs pretending to be carrying things for other passengers. In a split of a second, I noticed that they began pushing against me and my carry-on bag and when I had looked at my bag, I noticed the zipper was open, and my other bag containing the stolen items were missing. I jumped off the train and informed the conductor and all he said was either I get off now and report to the Polizzia in the station or wait until the train stops in Ventimiglia and report it there. 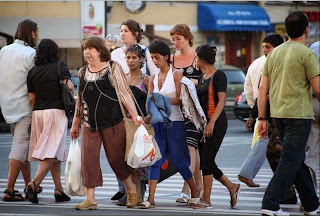 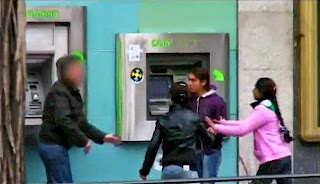 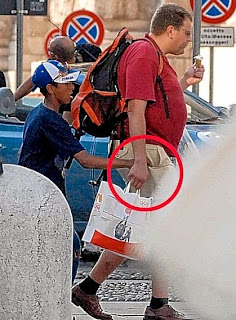 Adrenaline takes an effect on situations like these and the rest was history.

We got off and went straight to the police and all they could do was shove a piece of paper asking me to just file a police report. When I informed them I could identify the thieves, all they did was tell me that: (1) they spoke no English (which I thought was a lot of bullcrap), and (2) that I should just proceed to the Philippine consulate and report the loss of my travel documents.

That was such a bummer! I saved up for this vacation and I felt angry over the incident!

My partner was busy calling the credit card companies to have my cards and ATM cancelled. I proceeded to the Philippine consulate in Milan. With the taxis on strike that day, I was having such a horrible day. I took the subway and got off at the 5th stop but could not figure out where Stromboli Av. was located. I asked a Filipina on the street (her name is Doris), for directions. She was running late for work but when she found out about what happened to me, she accompanied me to the consulate office.

At the consulate, I was endorsed to Jeremy who asked me to fill out some forms and listened to my disheartening story. Today, I was another statistic added to the millions of "gypsies" and thieves that roamed the streets of Europe. Jeremy said that there are almost 10Million of these kind that ply the streets, mostly in Italy, France and Spain. Obviously, it was something I knew, but felt so stupid about not having to be extra careful. I had to reach the inner recesses of my being to go through anger, denial, bargaining, and simply accept the fate - I was robbed. I was violated. Over and over again, the scene kept playing in my head.

On the kindness of Ms. Marichu Mauro (consul general) and Ms. Helen Sayo (Vice-consul), they gave me a new passport so that I could finish the rest of my vacation. In less than 3 hours, I had a new travel document and some papers to support the fact that my passport was stolen.

When I left the building of the consulate, a Filipino who was selling longganisa offered to take me back to the train station so that I could meet up with my partner.

The silver lining in the low of this vacation were the Filipinos who helped me along the way. They were angels that guided me through my nightmare.

While my partner advised that we abort our vacation, I decided against it. It was a simple decision because I already felt violated from the incident and I did not want to give these people the extra happiness of having to spoil a long planned trip. My happiness was not theirs for the taking.

As I write about this incident, I cannot help feel anger all over again. Angry at myself for not being extra careful. Angry at the thieves for taking other peoples property and valuables because it's their way of life. Angry at the Italian police and government because they do not seem to care about tourists who spend money to visit their country (and pay for the entry Visa which is scrutinized to the hilt!).

While we were getting our new train tickets to Nice, I noticed that there were several thugs stationed at various vending machines for regional tickets. These were the kind of people I was trying to avoid. I saw them at the Firenze station, at the Tiburtina station, at the Pisa station. They were lurking and waiting for victims of their scam. Italy has been tagged by National Geographic as the "Robbery Capital of the World". In a series featured at NatGeo, the various scams by these robbers were highlighted. I recall that before I left for Europe, it was in the news that the Chinese government insisted that France provide better security for the Chinese citizens that go on vacation in Paris. With the millions of Euros that Chinese tourists pour into the shopping district of Paris, the least the French government could do was to make their stay less stressful. I would say the same for Italy. Visibility of the police force and some sense of security from the government should be enforced.

The consulate had informed me that what happened to me was a daily occurrence in Italy. Ever since Europe became one state union, other countries had to contend with this problem. Most of gypsy thieves were from Eastern Europe and mostly Romanians. And crossing the borders of various countries became easy for these criminals. There's also a syndicate that manages these criminals. The economic crisis in Europe had worsened this situation over the past five years.

It's a painful lesson learned and in the future, I vow to be more careful with my things and less trustful about people or even give them the benefit of the doubt.

There will be future travels and escapades to blog about. And part 2 of this blog will tell my story - on how one tragedy should not defuse our happiness.

I believe that after hell, there will always be heaven.


(N.B. Photos are care of www.bella-toscana.com/pickpocketsinitaly.htm#.U4sBjpSSw1d
Read this article as it is so accurate to a T)
Posted by Kid at heart at 6:43 PM