Tips to remember when traveling to Seoul, Korea 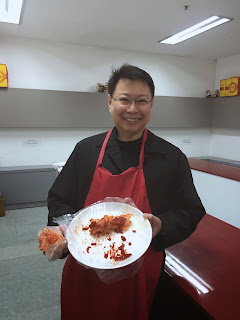 As of this writing, I'm holed up in my hotel (the Ibis Ambassador Myeongdong) trying to recall what are the most important tourist trips when traveling to Seoul, South Korea. In case I forget, or am inaccurate, feel free to comment.

During our trip to Seoul, we never took the subway for the very reason that I was traveling with my partially disabled 78 year old mom who really wanted to see some Cherry Blossoms in her lifetime. Hence, the extraordinary preparations on this travel.

1. I told my travel agent gazillion times that I was traveling with a partially disabled senior citizen. Make sure that the wheelchairs are in place. That's where you see the very very wide discrepancy between the Philippines and South Korea, not only in the service of the airline but the airport as well. We took our flag carrier Philippine Airlines (PAL). The heat was horrible. NAIA 2 was sweltering hot and all those giant fans did nothing to cool the aging airport that is home to PAL alone! And the wheelchair (and the guy supposed to push the wheelchair) was nowhere in sight. The Holy Week exodus is NO excuse for the nonfunctioning air conditioners, nor for the sloppy service in assisting elderlies and the disabled, or being such a paltry lousy airline altogether. When we arrived at Incheon Airport, the wheelchair for my mom was ready and the guy who was handling her was so efficient and caring that you'd even wonder why the Philippines even attempts to compete with the tourism industry. The itsy bitsy teenie weenie airport in Manila that's cramped like a sardine can has little to boast to the rest of the world in terms of being an airport showcase. The least it can do is make it more comfortable instead of adding insult to injury.

TIP TO REMEMBER: Even for the difference in bucks, take Korean Air or Asiana. At least the airline service will compensate for the lousy airport in the Philippines. Besides, the time schedule of Korean Air and Asiana Airlines are much better than PAL or Cebu Pacific.


2. Bus, cab or private transfers? Because the weather was still between 6-15 degrees centigrade in Seoul when we left Manila, I made sure that we had private transfers so that my mom would not have to bear the cold and have to walk too far. The limousine bus 6015 from Incheon Airport to our hotel was a direct one. It would only cost you 10,000 Won (around P400.00). Taxi is dirt cheap in Seoul. If you're four people traveling (or five to six using a Jumbo Taxi), you can split the bill of 60,000 won (around P2400.00) by cab. Private transfers were too pricey at $250 each way (or P12,000). I will have my travel agent shot tomorrow for not foreseeing this.

TIP TO REMEMBER: Never trust your travel agent. Do a more thorough research. Better yet, make a Korean friend and ask him/her the best way to travel around Seoul or any part of S. Korea for that matter. If you're traveling in groups, the taxis are more cost-efficient and faster than taking the subway.

3. Now that we've settled into the cab mode, here's the third most important tip - never trust a cab driver that he knows directions even if the concierge in your hotel writes it down in Korean or that he has a GPS inside his cab. Chances are, you'll get lost with some of them who are either unfamiliar with most of the places around Seoul or just want to earn a few more bucks from you because of the cheap cab fare in this country.

TIP TO REMEMBER: Always remember the nearest subway station of your destination. That way, in case your cab driver gets "lost" and you need to obviate the language barrier (they don't speak or understand English at all!!!), you can always mention the subway station. Now that's a common language for them.

4. It's always great to be spontaneous and sometimes some of us like having an itinerary so we book a tour ahead of time. Unless you can get a private tour (which will cost you around $600-$1000 depending on whether you want lunch included or not), it's always good to go on a city tour so you can get acquainted with the history and landmarks in Seoul. And while there are many places to go and culture to learn and fun spots to see, some of them are really not that great.

TIP TO REMEMBER: If you had little time to explore Seoul, the best adventure would be the night market on Nandaemum and Myeongdong. You can literally just pig off the food on the streets with the street hawkers. However, beware because some of them remove the prices when they see an abundance of tourists. Usually the prices of the food are similar to one another. The food trip is so worth it! You just need to avoid too many palaces. One palace is enough. The Blue House (where the Korean President resides) isn't that fabulous. You can skip that one too. Namsam Seoul Tower is a nice spot to visit. It's not necessary to go up higher when you're inside the tower. Lotte World Adventure Park is old and gray and expensive (almost $38.00 per person) and they won't allow you reentrance when you exit because they usually offer the one day special pass for tourists. Most of the rides in the park are closed and some (especially the indoor park) will require additional payment (on top of the entrance fee) so you can play or experience some cool stuff. Seriously, it's a waste of money. The cartoon characters are ugly and I've never even heard of them. Oh, the good part about Lotte World Park is that there's a shopping mall beside the adventure park. The park is not disabled friendly, although they do rent out wheelchairs. Shopping and food tripping are the highlights of Seoul.

5. Of course we've come to the best tip. Eating out! Korean food is probably one of the best in the world (I love Japanese food more). With that said, Kimchi is their national staple and every meal is as spicy as the Spice Girls. There's some fusion Korean food but they've tried to make their meals as authentically Korean as possible. Because you and I most probably don't read or write or speak Korean and many of the Koreans do not seem to understand English clearly, it would be best to look for a few telltale signs we can find useful.

TIP TO REMEMBER: Always ask for an English menu - just to let them know you're a tourist, you can't read or write or speak Korean. If there's none, use a menu that has pictures and point to the picture of the food you want to order. If you're still unlucky, and you're starving already, look at the next neighbor and find out if what he's having is good or great and ask the waiter to just get you what the guy seated next to you is eating. When still in doubt on how good the restaurant is - look for a sign that says GOOD RESTAURANT. The latter is given by the government to assist tourists who like to play ala Michelin! And if you're still in doubt on the food - remember - you'll never go wrong with Korean Fried Chicken (or Roasted Chicken).

The next blog will center on our vacation to Korea with my small caboodle family.

Happy Easter to everyone in advance!
Posted by Kid at heart at 11:50 PM

Hi Benjie, very insightful. I will be there with my mother the end of the month. My advantage would be that she speaks the language fluently. I hope to have as much fun as you guys did while there.