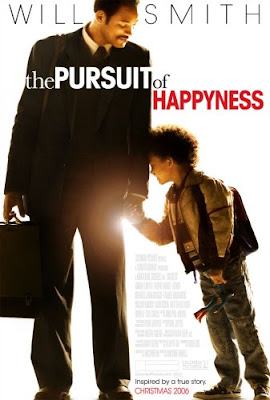 It was a lazy Sunday afternoon. Sifting throught the cable channels, I chanced on the movie "The Pursuit of Happyness" starring Will Smith playing the role of Chris Gardner. The movie was based on a true-to-life story of a homeless salesman-turned stockbroker, in this heart tugging film where the the search for happiness lies in one man's struggle against all odds. The screenplay written by Steven Conrad is based on the memoir of Gardner.

The gist of the story runs around the life of Gardner, who is a salesman for a "bone density scanner". The financial dire his family is plunged into spins off in the beginning of the movie, paving the way for his estranged relationship with his wife who decides to leave him and their son, Christopher, to make a life for herself. After the wife abandons him and their son, Chris is left in a void of having to fend for himself and his son through various means. While he is provided a chance to train to become a stockbroker, he literally lives off the streets of San Franciso and each unfortunate situation is a bad streak of dominoes falling off each other. The moving scene of father and son having to sleep in the metro's bathroom or stay on the train without getting off so that they can sleep was most moving. The central theme revolved around one man's search for happiness (spelled "happyness" intentionally in the movie title) against all odds that he faced. The major driving factor for that search, centered around his 5 year old son, who lugged around with him for most of the day.

The movie, while considered by critics as a "cheezy film verging on an exaggerated version of life with a fairy tale ending", is indeed a heart-warming inspirational movie that treads on the grim realities of having to cope with challenges in life.

I can relate to this movie and the situation of Chris. For someone whose life has not been a bed of roses nor was born with a silver spoon in his mouth, the pursuit of happiness is everyone's dream. It is the silver lining behind the clouds and the pot of gold at the end of the rainbow. Both of these may be simply dreams that we all wish to attain, but they are all humanly achievable.

I once told a friend that we do not all have 'aha!' moments that would spell a difference in a day. In actuality, there are more times we go through periods where challenging moments in life test our integrity, loyalty and determination as individuals. They test our sanity and strength. But those who live to fight and survive another day are those whose lives are changed during that journey. And come a little closer in the pursuit to the goal of happiness.
Posted by Kid at heart at 10:17 AM