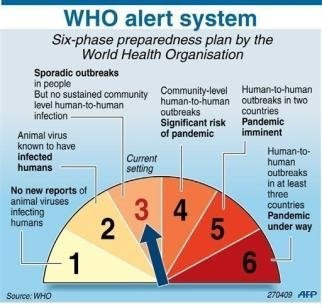 The Swine Flu has all government agencies on their toes. At a time when the economy is reeling from a worldwide recession, the Swine Flu (H1N1) pandemic comes at a worst time.

With the epicenter of the pandemic identified by the World Health Organization and the Centers for Disease Control as emanating from Mexico, the latter has literally been crippled to its knees.

As of this blog, the WHO has declared that the Swine Flu pandemic is now on alert level 5 on a scale of 6.

When SARS hit HongKong and Asia in 2003, the economy was upbeat. And while mostly HK and China were financially devastated, a year after, the countries were back in business.

Today, the picture is different.

This pandemic must get contained soon, but I agree with the CDC with the fact that we are probably seeing only the tip of the iceberg. Mexico is underreporting the cases of Swine Flu for further fear of battering its already battered economy. The closest neighbors have literally minimized access to and from Mexico for fear of the virus spreading to disproportionate levels.

Air travel, tourism and other industries being widely affected with this health crisis, we can only heed the advisory of minimizing travel to the U.S. and Mexico.

But like most Filipinos who are "travel buffs", there is no escape from canceling their plans. Swine flu or SARS, it's summer time and it's definitely off to their preferred destination, especially the United States.

I had a batch of patients this week that wanted to get the flu vaccine because they were traveling to the U.S. I had advised them that the vaccine is not useful against Swine Flu, and their jaws dropped. They wanted to buy Oseltamivir (Tamiflu) and take them with them as prophylaxis. Duh?!?! I had to explain why not and advised caution during the trip. Usual advices of the CDC and WHO on trying not to get sick while in transit. And how to minimize getting ill while in another country.