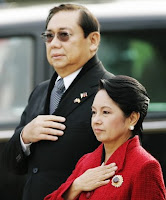 Okay, so it's none of our business that Ate Glue had a boob job some 20 years ago. For whatever reason it may be, whether it was due to an underlying illness or for aesthetic purposes, we have no business in the boobs she bears.

What is eating the public and the unfortunate attention that it has been given is the fact that it was discovered through a leak (no pun intended) through some blabbermouth who just couldn't keep the giggles off the lid.

My take on the situation:

- while there is a patient-physician confidentiality that binds the doctor and the patient, the "on-lookers" during a procedure are usually the leak in information and are not bound by the same confidentiality agreement. I've always said that when only one person knows what's going on, it's a secret. When two people know it, it's not a secret anymore. I agree that when it comes to some degree of 'secrecy' that went on behind the boob leak and the boob job, it was no one's business.

- the initial take by an incompetent media on malice put into the minds of the gullible public regarding the boob job of GMA was unforgiving. The NBI should be investigating who the f**king idiot that began spreading the "indecent" rumor was!

- but there is the truth portion. While the boob job WAS and IS none of our business, the person's health was the actual story behind the issue. After all, as public figure, as president of the country, the people needed to know. And public figure will always be public property. This is true, not only for entertainers, but for people in public office as well. During the time of President Ferdinand Marcos, truth pray tell that the failing health of Apo Ferdie was highly talked about. Speculations were confirmed when the deposed president and his family had gone into exile in Hawaii, with the people finding out that indeed there was a hospital bed and dialysis apparatus in Malacanan. The transition of power in a democratic country should always be transparent. One can argue the case of Tita Cory, where she has supposedly refused chemotherapy and is very ill. Why does not the public barrage the case of ex-President Aquino? The answer is simple. She is now a private citizen and Citizen Cory has the right to privacy because she is not the president of the country anymore. There is no vested interest in the health of Mrs. Aquino (whom I continuously pray for strength during these trying times) because there is no National Security issue.

If only the officials in Malacanan had provided the truth from the get go, the boob job of Ate Glue would not have even been an issue. What was so wrong in acknowledging the humanity of a president?

What is wrong with the current picture is the fact that the President's men continue to lie to us. She didn't check in to Asian Hospital to be self-quarantined. There should have been no denying that the President needed to undergo certain tests because she had medical concerns. There is no infallibility when it comes to being human. After all, only God is infallible. And Gloria is not God.
Posted by Kid at heart at 3:09 PM