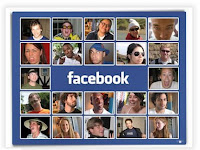 "Therese's mom doesn't mind the things she posts on Facebook - she's cool that way. Her mom though Therese was cool about it, too, and one time she posted a reminder on her wall: 'Anak, you left your tita's pasalubong to you on the kitchen counter, 'yung mga underwear na Victoria's Secret.'"

It was time to say thank you then slap her mother.

The article last July 18, 2009 on the Super LifeStyle section of the PDI (Philippine Daily Inquirer) by Ruby de Vera was an eyeopener, if not an eye popper for the parents who are Facebook wannabees.

Alright, don't get me wrong. It's not that I never started on the wrong foot with this FB thing. I also made comments on the walls of my friends that should have been something that I should have just sent as a personal email. And twiddle-de-dee and twiddle-de-dumb, but it took a few days to maneuver my way into FB. What was once upon a time the world of the yuppies and the teens on social networking has now become passe. The "older generation" has started to blog, to use social networking sites in order to FB or Twitter, upload on MySpace, or share pics (non-adult or adult) in cyberspace.

But putting notes in cyberspace, particularly for social networking sites, requires a little tack and responsibility. As adults, and as parents in particular, you've just invaded THEIR SPACE!

As kids, there's the tendency to cringe when parents have fun at their expense. I've seen parents upload their kids singing karaoke or their kids pics in the nude when they were babies or their kids dressing funny for a party. While FB or Friendster or Twitter IS NOT the exclusive domain of the young, we have to hand it to them that when they started off this chain reaction in cyberworld, times have indeed changed. And believe me when I say that the kids agonize whether they should accept or ignore you when you request to tag yourself as their 'friends'! As de Vera puts it "Facebook is your turf, the one place in the cyberworld where you can be yourself with your select group of friends, in a setting both public and at the same time private. You really don't need your parents to see what kind of hangover you had from your friend's birthday party, as evidenced by the pictures where they tagged you."

But this social network has gone beyond just friends and a group of friends. It has spilled over to politics, particularly with the Obama presidency in the United States. In the Philippines, presidential wannabees like Chiz Escudero and Richard Gordon have put up a FB post where I believe that some techie that is paid by these politicians puts up posts to get the opinion, pulse and eventually vote of the youth. Watching the thread of opinions from these lackeys is not fun, as you can read the boot-lickers clawing their way to a pat in the head. Gimme a break, it's not even Dick Gordon or Chiz Escudero you're chatting with on FB!

But back to the topic at hand. So your kids are complaining. Their parents are on facebook and they need help! Erika Brooks Adickman and Jeanne Leitenberg have created a website http://www.myparentsjoinedfacebook.com that is interestingly funny. It allows the kids to throw the pie back at the parents in a humorous way, as in a "back in your face" where kids want their parents to simply behave like parents.

At the end of the day, you'll realize that FB is all about each others space and not for parents to be monitoring their kids activities. For both the kids and the adults, we just need to delineate that space. After all, as adults, we were once kids and enjoyed the flow of fun before life eventually caught up on us. As for the kids, well, you'll soon be adults and some will eventually end up as parents, and you'll get the drift that your parents are probably going through now.

So the next time parents get the impulse to tag their kids as "friends", talk to them first if it's okay and not just ask permission in cyberspace. There's enough space to enjoy cyberworld. One click away should not create animosity in the family.
Posted by Kid at heart at 11:25 AM