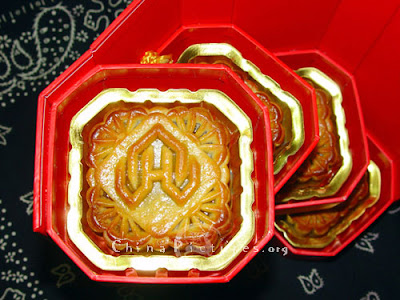 Today marks the first day of the mid-autumn Chinese Moon Cake festival. It is the third major festival of the Chinese calendar and is held on the 15th of the 8th month. October 3 marks that day in the Roman calendar this year.

Since I am 100% Chinese by blood, we celebrate this festival with much fanfare, preparations and expectations annually. I had asked my mom the history of the event and the story she can remember, which I tell all my friends when they ask me, goes back to the 13th century. At the time, China was in revolt against the Mongols. Chu Yuen-chang, and his senior deputy, Liu Po-wen, discussed battle plans and developed a strategy to bring in weapons and armors to a certain walled city held by the Mongol enemy. Liu dressed up as a Taoist priest and entered the besieged city bearing moon cake. Inside the moon cakes were messages which he distributed to the revolutionary movement. When the time for the year's Chung Chiu festival arrived, people opened their cakes and found hidden messages advising them to coordinate their uprising with the troops outside. The biggest moon cakes had weapons hidden in them. Thus, the emperor-to-be ingeniously took the city and his throne.

There are other stories on the internet like the Lady in the Moon and the Man in the Moon, but I would prefer to relate to the story my mom told me.

In astrology, the moon is at its maximum brightness for the entire year during this day. With the onslaught of Typhoon Pepeng, we will not see the moon tonight. But we will definitely celebrate it with dinner followed by the traditional dice game where we try to see who wins the "chong wan". It is a game of luck and the dices will determine who among us will bring home the grand prize. It is said that whoever wins the grand prize is granted luck all year round. True or not, it is a gathering of family and friends. A bonding. Even during these times of tragedy and adversity, there is reason to celebrate. That we are alive. That we are well. And that we have lived another year, to be with one another to celebrate life.