The story within Harry Potter 7 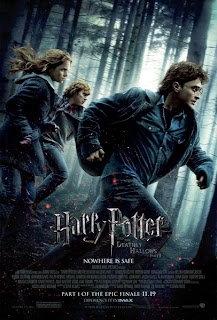 I am a Harry Potter fan.

My nephew and niece actually grew up on Harry Potter, but my niece is the more avid follower.

Over the weekend, I was one of those that queued for the first installment in the last book of Harry Potter and the Deathly Hallows. The 2hr 25 mins film is not being reviewed in depth here. It would spoil the fun of those that have not seen the movie. As for those who are avid followers of J.K. Rowling, they already know the whole story and this first half of the movie's last franchise. To those who have read the book, they watch the movie to critique as to how faithful the movie is to the book. And I guess that is the way this last installment is. How cinematic and aptly faithful the final saga of the Harry Potter franchise movie is to the book, is a fitting way to end the Harry Potter films.

But I will segue to what was most interesting in the HP7 story was the story within a story.

And this was the part of the movie that struck a cord in my review of the film.

The animation of the story of the three brothers who tried to escape death was not only graphically excellent but very well told. As the three brothers attempted to cross the river (which Death had claimed many lives), they built a bridge with magic. But Death showed displeasure at the cunningness of the three brothers. In the face-off, he offered the 3 brothers one magical wish each. The eldest of them asked for a wand that would make him the most powerful sorcerer. The second brother asked for a magic stone that could resurrect back the dead from the past. The last brother asked for the cloak of invisibility which would make it difficult for anyone to find him in his lifetime. Death was disappointed with the request of the last brother, but gave in to his wish.

As the story had gone, Death would take back what it gave - to the first and second brother. But Death searched and searched for the last brother in his lifetime. And only when the humble younger brother was ready to go with Death, did he pass on his cloak of invisibility to his son and peacefully left with Death.

The story touched a raw nerve with the viewers. After all, HP7 is not a child's movie any longer. Those that trekked to the movie house were practically those that grew up with Harry Potter since it's first franchise almost 10 years ago. That the movie had taken a darker turn as well was in keeping with the story of the book.

Yet the story within the story of HP7 was a respite from the morbid culmination of this final installment of Harry Potter. It foreshadowed more death in the upcoming final episodes but was also a constant reminder on the mortality of beings - wizards or muggles - in this world.

This, was an excellent centerpiece, to the story of HP7. Only a creative genius would have thought of playing with a story within a story in order to preempt the audience to the stark realities of life and Death.

This installment has outdone the other HP movies. It's a definite must see film. And even the uneasy ending which leaves you wanting for more leaves you with enough to satisfy your Harry Potter fix.