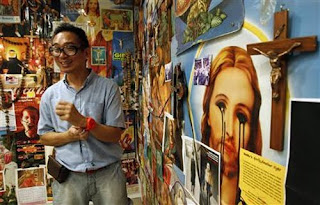 Imelda Marcos decades ago said that art is what is True, Good and Beautiful!

No one has placed the three words to describe it better than the former First Lady. And although her husband may have been a despotic leader, it is without doubt that Marcos is one who can recognize true artistic value.

So when the Cultural Center of the Philippines put up the art exhibit of Thomasian, Mideo Cruz (yes he's a graduate of the University of Santo Tomas, the Royal Pontifical University in the Philippines), I wondered at what the ballyhoo was all about.

And then I saw it.

There is art and there is fart. In a country where religion plays a vital role in the beliefs and faith of its people, it was blasphemous to utilize the very core of religion to profess his supposed "artistic" interpretation of what the CCP classified as a work of "art". 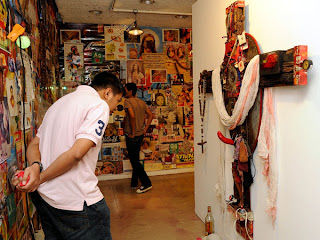 I agree that perhaps "art" like "speeches" are the "artists" license to express their freedom of expression. Perhaps I could take a photo of Cruz in the nude with his whole body shaved to the bone and wrap him in Glad Wrap and say that he resembled a condom with the biggest prick inside it. To me, that's the artistic side of expressing an asshole who has no respect at all for other peoples beliefs and senses.

Artists will always wage a debate on whether there is good art and bad art and how appreciative people are of either of them. Some even profess to use Leo Tolstoy's arguments on "What is Art?" to clearly delineate what is a work of art that functions as a communicative bridge between the artist and the audience. Some pornography producers say that their work of eroticism is art. And of course, justify these works so that it can entice the libido of the consuming public. The dichotomy of good and bad art is left to the audience to decide.

But there is also a thin line between being delusional and schizophrenic. To anyone who appreciated the fact that a penis protruding from the head of Jesus Christ was art is tantamount to saying that the "masterpieces" of Cruz was akin to a pedicab looking like a BMW.

Seriously, Cruz is a nut job and anyone that appreciates his work as a work of art has got to have his head checked by a shrink. Appreciating bad art is like saying that you have no sensibility to even recognize the surreal.

If Cruz is looking for publicity through his controversial work, he definitely has found it. But at what cost? My dog and cat can draw a better masterpiece than this loser.

The irony is, at least the Marcoses can distinguish what is truly art. It's sad that PNoy and his government has distanced themselves from this controversy. Oh well, birds of the same feather, flock together! Talk about autistic people! Geez!!!
Posted by Kid at heart at 8:57 PM