A matter of inconvenience 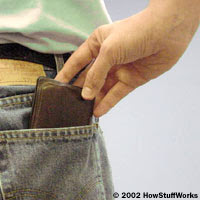 My maids were running around the house like chickens without a head. They announced to the household that my driver had been robbed - again!

My driver goes home to Batangas because that's where his family is. He earns more than the average family driver (yes, I pay extremely well). In spite of his better earnings, he actually spends 60% of his pay just on transportation. After explaining (I think the right word is "castigating") to him the stupid economics he practices, he decided to reside in Bicutan with his brother (which is a 15 minute jeepney ride to my residence) eventually. It's either that or I told him that he can find another job somewhere. There are days when he goes home to his mother's house in Makati. That's another story.

My driver commutes by public transportation from Alabang to any other destination home - Batangas, Bicutan or Makati. Last March, on his way home from Alabang, he was robbed. Someone slashed the back pocket of his pants and took his cellphone and wallet in the train. I don't think they took much, but he lost his ID, driver's license and of course his cellphone.

He needed to borrow money to replace all these and the hapless employer (that's me) had to lend him money. Of course, since it was a debt, he needed to repay these over the next few months with minor deductions in his paycheck. Which meant that his take home pay would be a bit less and that his family would need to scrimp.

Fast forward to Saturday. So my driver came in that fateful Saturday morning after coming from Makati. His story - while waiting at the bus stop, a couple had approached him to ask for directions going to God-knows-where. He found it strange that the couple had boarded the bus with him and even sat beside him! (Mind you, my driver is not even good looking nor does he dress well at all. If there's an award for dressing down to the pauper - my driver would win hands down.) It was a longer trip from Makati to Alabang. And he fell asleep. When he woke up in the Alabang station, the couple wasn't beside him anymore and when he alighted, he noticed that his cellphone and wallet had disappeared as well.

It was take two for my poor driver. I don't think the thieves really took a lot because he had no money in the wallet except for his driver's license and the old mobile phone was one of my old recyclable unreliable phones.

I blog about this because of the inconvenience and hassle that it brings to ordinary people, living ordinary lives, trying to make a decent living through ordinary means. I am flabbergasted at the many cries of human rights activists who decry that when policemen catch criminal in the act of a crime and beat them up, it's a human right violation! These mendicants and scums of the earth have the temerity to prey not only on the rich, but most despicably on the poor. These robbers who have nothing better to do with their lives and are too lazy to even get a decent job profligate their trade by perfecting their technique at robbing people of their hard earned money. And they have the guile to cry out human rights violation? DUH?!?!!?

I have been robbed several times as well. It's not a good feeling to lose hard earned cash or kind to thieves. It's a feeling of anger, desperation and helplessness. Even if you go and report it to the police, I have serious doubts that they will even help you solve the crime. The cops in the Philippines will simply make a police report, give you a copy, shake your hand and tell you to go file an affidavit of loss. Seriously, I have never even heard of someone going to the cops, reporting a robbery, and a cop following it up or at best, even solving it. It's why these thieves just go on a robbing spree. There's no solution to the crime. It's why people think that the cops are bad. There seems to be collusion to each crime.

It's like an everyday thing in Manila! It's like a run-of-the-mill scenario where kids high on rugby roam the roads, where mendicants tap at your car window begging for scraps or scrape your car, where the traffic enforcer is busier texting in the middle of traffic and running after number coded cars rather than enforcing traffic rules and regulations on the road, where the normal Pinoy will need to piss against any wall because he needs to take a leak, where jeepneys, trikes and buses load and unload in any part of the street they want, because they want to. It's like civil disobedience is a matter of every day life. There are government agencies that are mandated to implement the rule of law. Never mind if the public know that they enrich themselves because they steal, but puhhleeze do something good in return, at the very least. It's despicable enough that they steal from the coffers of tax collection and spend like there's no tomorrow our hard-earned taxes but to turn a blind eye to their job description and even to what they should or should not be doing is a bitch!

And so, the story goes that not only was my driver inconvenienced, but I and his family too. I had to, of course, lend him money to get all these lost documents, again! The police report and the notary public had served no purpose. You needed to enrich the PNP by paying for a police report and then the inutile lawyers who do nothing but issue a notarized affidavit of loss, and so in the end it's these idiots who sit back and do nothing that actual gain from the robbery! Sanamagan this country. It's so third world, so Banana Republic, so idiotically run by amateurs, so politically corrupt.

It also meant that my driver's family will be inconvenienced as well. They will need to buy less rice for this week. The kids will need to walk going to school again. The wife will need to scrimp on a can of milk for the young one. And I will be Santa Claus even before Christmas, again!

The rage that spits from my guts cannot be measured in this blog article. There needs to be some change in the way we look at crime and punishment in the Philippines. Just slapping the culprits on the wrist for the inconvenience caused is not enough. Let the human rights bleeding hearts cry out for all I care. If I were the president, I'd make sure that once these thieves got caught, they'd get their hand amputated in public on a Sunday morning with free admission to all. Drug dealers would get shot by firing squad on a Monday morning live on Magandang Umaga with all cameras focused on their next of kin. Rapists would have their penises amputated on Pinoy Big Brothers as added bonus to the show. Murderers will get executed every Saturday at the SM Mall of Asia or the Araneta Coliseum. Government officials and personnel caught stealing will be hanged in public at the Ayala Malls on Tuesdays to Fridays.

In the Philippines, democracy has a strange way of creating inconvenience to the ordinary people whose ordinary lives are driven mad by people who deserve to just roll over and die.

Agree! You have captured in your post all that I wanted to say against thieves (common and govt officials alike) traffic enforcers, and PUV drivers. Nakakakulo talaga ng dugo.