Xoi - A taste of Vietnam

I've been to Vietnam several times to give lectures. Saigon (Ho Chi Minh) in particular.

Besides the modernity amidst the backdrop of once old Saigon, the shopping in Vietnam is one of the best in the Asian region. And then of course, there's the food that you shouldn't miss.

When Xoi (Vietnamese Kitchen) opened at the Alabang Town Center, I wanted to see how authentically Vietnamese the food would be. Of course, there's already Pho Hoa. But the latter has not lived up to the expectation I had of a Vietnamese cuisine - lacking in flavors and originality. 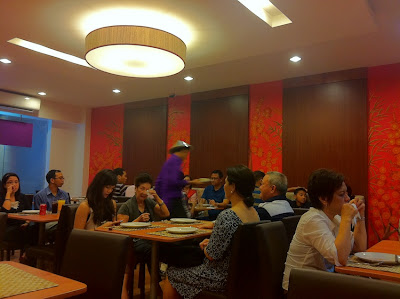 Located right beside PF Chang at the ATC Mall, Xoi's interior is simple and the servers are dressed in well, trying hard Vietnamese outfits. Our server Mai was very helpful and while she may have lacked the Vietnamese look, she compensated with her Filipino hospitality what the place was highly lacking in ambience. The kitchen was open to the dining area and it's interiors looked like it was on a really tight budget - minimal in decor and had a crowded and noisy feel.

Now off to the food.

For appetizers, we had the Fresh Spring Rolls 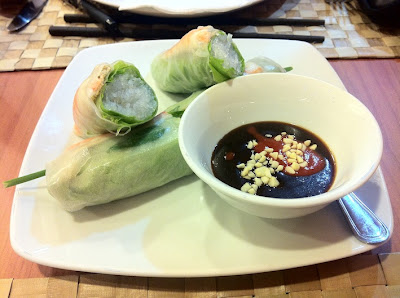 whose peanut sauce had a dash of Tabasco, which made the flavors of the rolls really stand out well.

The main course consisted of Five Spice Chicken in Herbs 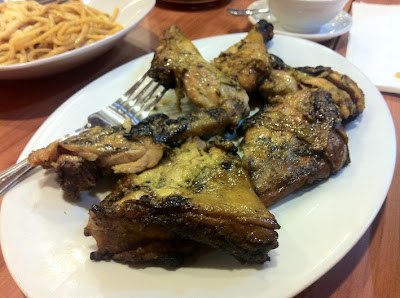 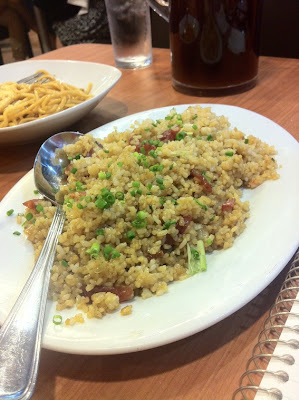 And the piece de resistance of their original Garlic Fried Crabs (with the shell all removed) and a side dish of pasta in parmesan cheese (that came free with the Crabs. Incidentally, you'd get one really large pitcher of Lemon Iced Tea for ordering the Crabs). 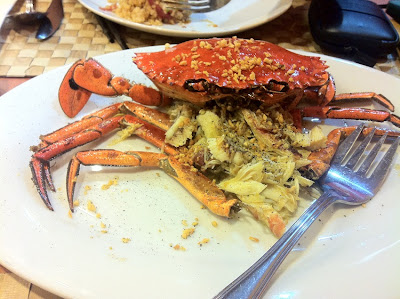 The chicken was nicely cooked and had a sweet and salty taste to it. The sauce that accompanied the chicken was nothing spectacular and reminded me of the dipping sauce of Inasal. The rice was a small serving and truly lacking in other ingredients of a Fried Rice meal. It had very sparse amount of chinese sausage and that was about it. It was a bit soggy but tasty. The crowning glory of the meal, however, was the crab! This crab was divinely cooked and meaty and you could taste the freshness of the crab as it was sweet amidst the garlic that peppered it. If you're someone who doesn't like getting his hands tainted with having to peel off the crab shell, this is something you'll appreciate as it comes as a "Naked Crab" - where they peel off the shell completely and serve it all crab meat!

After the main course, we asked if there was a dessert menu. Unfortunately, Mai informed us that they weren't serving dessert as yet.

Total Bill: P2100 ($48)
Recommendation: I would recommend this to friends who would want to try a taste of Vietnamese dish. However, it's not really a far cry from Pho Hoa aside from some of the more authentic seafood that Xoi offered. I wanted to try to mussels in garlic white wine sauce but unfortunately, it must have been a popular choice because they ran out of mussels by the time we had dinner. Incidentally, make sure you have enough cash because the crabs (we had the medium size good for 2 people) are quite expensive - it was 60% of the total bill and they charge an extra P100 ($2.50) for removing the shell for you! Nevertheless, it was worth the bucks!
Would I go back? Definitely. I'd like to try out the other food on the menu. They're really not that pricey but the servings aren't that large either.
Posted by Kid at heart at 6:27 PM