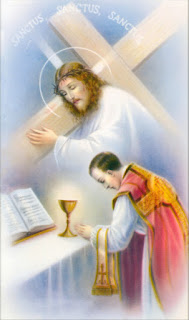 Brother Kervin is 19 years old. He's been with the San Carlos Seminary for three years. Yesterday, during church service, he was made to give a brief talk about vocations.

He told his life story. When he was in 3rd year high school he already knew that he wanted to become a priest. During his graduating year, he watched his classmates apply at various colleges and universities, hoping that one of the big schools would accept them - and they would fulfill either their dream, or their parents dream of being bankers, businessmen, doctors, engineers, architects, and other professions that would bring in a "brighter future" in the corporate world or become some overseas worker.

He took the first exam at San Carlos and failed. Not daunted by the failure of serving God, he was an out-of-school youth for a year.

The next year, when he took the exam at the seminary, he passed.

He is on his third year of a ten year journey to priesthood.

Kervin is one of a few younger people nowadays who look to serving their lives in the service of fellow men. The priesthood is one of the most, if not the most, challenging of all vocations.

Many of us follow the road most traveled. Parents don't encourage us to become priests or give our lives up for the service of our fellow men. At least the parents I know, in spite of being "devout" Catholics, do not encourage or even raise their children in the image of the Catholic faith.

While it is a calling to serve any religion, it takes more than sheer determination and conviction to stick to the vocation. There are forces, spiritually and morally, that work at making failure an option in the course of their journey.

After the short message of Kervin, the church goers applauded at the short, but determined speech of a young man who would give up other dreams to chase his own in the service of God.

We may not have many Kervins in this world, but he was an eye opener in this world of digital technology and consumerism - telling us that the faith of one, can save mankind.
Posted by Kid at heart at 6:21 PM