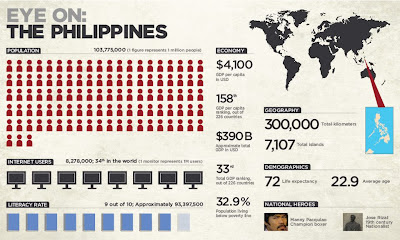 One figure tells us more information than a thick report of blah coming from an agency.

For us to remember a few fractions, decimals, percentages and numbers and a few facts about the Philippines:
1/3 - fraction of the total population that live below the poverty line
1.3 Billion - number of text messages exchanged daily
90% - percentage of the population that are literate
72 (years) - average life expectancy (which means that if you're dead before this age, it must be due to cancer)
22 (years) - average age of a Filipino (which means if you're older than this and you're reading this blog, you've got to be considered really old)
1 & 3 - must be feng shui with these numbers but what's the worst that can happen? Sure we're the worst airport in the world and number 3 for worst places to drive in the world...but we're also numbers 1 & 3 in terms of the best, where we're number 1 as the best country for business English proficiency and number 3 for best surfing places in the world.
99 Million - number of mobile phones active in the Philippines
57% - percentage of the total population that are below 18 years old (woot woot for the practice of Pediatrics)
8.27 Million - number of internet users in the Philippines (which I think is an underestimate)

Ironically, Manny Pacquiao is heralded as a national hero, which I think is insulting compared to Jose Rizal. I mean really now, some people had just had their heads banged a bit more.

But yes, this is the Philippines, where Shoemart (SM) happens to be the malling capital AND the national park and NOT Luneta. Where ChaTime, Serenitea, and GongCha are the national drink and NOT Salabat.

So I wouldn't be surprised that if Jessica Sanchez wins American Idol (which I hope she does), she would eventually displace Manny Pacquiao (or Jose Rizal) as the next national hero.


Only in the Philippines!
Posted by Kid at heart at 11:17 AM