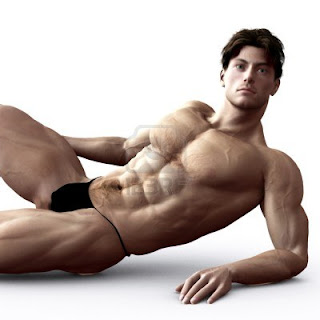 When they see someone who is effeminate acting, their first is impression is that he must be gay.

Being effeminate is not being gay. On the contrary, it's those straight acting boys who are gay that are difficult to spot. A girl friend of mine brought up the topic that it's difficult to spot who's gay and who's not today. So many macho looking men only to find out they are more of a woman than her. (Read - Carmina Villaruel aghast at what BB Gandahari aka Rustom Padilla has become). So she asked for me for "clues" - thinking I had a uhmmm nose for it or that it took one to know one!

But yes, as the saying goes, it takes a thief to catch a thief.

And with that said, here are my ten tell-tale signs when you wonder if the man of your dreams hits jackpot on the gay-o-meter.

1. Real men don't have abs
Yes, real men don't really care about their beer belly. Only three kinds of professions require men to have great abs - body builders, fashion models and male strippers. With that said, a guy who's more obsessed about his abs than your tits has a higher probability of being gay.

2. Real men don't wear BeBe cream
Alright so the Koreans have fashioned the BeBe cream. And so now everyone is wearing it. From girls to boys. While there's nothing wrong to good grooming, it's odd that your boy toy looks prettier than you. If he's smudging on the face more than you, it's time to dump the gal!

3. Real men don't wear tighties
When a real guy shows off what a great body he has, he does it with minimal fan fare on the crotch area. When a guy wears pants or underwear that has his whole crotch screaming for justice and freedom, man you've got to be careful. He's probably showing the weaner to attract other men to catch a watch on little junior down there! The gay boys dress to cruise other men. It's not fine to look like a male slut.

4. Pets real men have
So he's a pet lover. Nothing wrong with that. But if they guy loves shitzus, pomeranians or even has a doggie bag for his chihuahua or has siamese or persian cats for his pets, you need to blink twice. These breed of pets need super grooming skills and you need to take a second look at your man if he loves to comb hair.

5. Real men don't go to the gym 7 days a week
He's a gym buff. He's into pilates, gymnastics, yoga and pole dancing. My God - he's more of a bitch that you probably are. There's really nothing wrong with a healthy lifestyle but to be the gal in the gym...he must be there more often than not because he's cruisin the locker rooms. And it's not tits he's looking for, if you know what I mean.

6. Real men don't carry handbags
I'm not talking about carrying your handbag.
The fashionistas call it a statement. Prada, Tumi, Louis Vuitton, Gucci, Burberry, Dior, Hermes...you name it...they make it. They call it a man's bag. It's more expensive than the ladies handbag. You see it in the various seasonal collections that come out of their factories. Call it what you want dahling...it's still a handbag. The fashion gurus market it for financial reasons. Real men won't buy this fashion shit.

7. Real men don't go breaking girls hearts
They call him a man's man. Because? He has so many women on the side. It's like he has a harem full of girls swooning and dying for him. But breaking the girls hearts (and their hymen...excuse the word) because he wants them part of his collection to brag or boast is the worst kind of male species. These kind of men do what they do not because their penis is powerful, it's because they have so much insecurities that they need to fill the void...to show to themselves that they are heterosexual in orientation.
Incidentally, when a man is asked if he is gay, a real man will not say - go ask my wife. The wifey is always the last to know. I know a lot of married men whose wives don't know of their indiscretions. A real man will ask back - so what if I am what's it to you?

8. Real men are not bisexual
Some men say that they swing both ways. I've never believed in the word BISEXUAL. For God's sake - you can't like both the male and female organ. The mere fact that he enjoys blowing a rod as much as he likes licking your p---y well all I can say is that you're stupid to think that he loves you. That's a lot of crap! He can't like having it in the ass and plugging you to kingdom come as well. He's 100% gay.

9. Real men do not gossip
Some men have the gift of gab. That's a gift. But there are those that wag their tongues like forever. They talk about their next door neighbor, the girl they banged the other night, share other people's deep dark secrets. Yup, you want to let the world know about who's the biggest fuck up in the company - you whisper it to this guy. He's a really pussy deep down inside. And like the movie reporters, he's interested only in gossip.

10. Real men don't have Lady Gaga on their iPod
So here's the deal. What does Lady Gaga have that real men would go gaga over her music? Seriously - none. That's why Lady Gaga has two followings - the gaga girls and the gay boys. Her music isn't the kind that real men won't feel eroticized over. Her videos are all hunky boys in various states of undress. If your man loves her videos and music, he's probably oogling at the biceps, triceps and pecs of the back up dancers.