This year, I decided to splurge a little for my 55th birthday. The trip was supposed to be something out of the ordinary because my partner and I would be doing three different cities in two different countries in 11 days. Our flight on Delta Airlines and Air Canada was without a hitch. Delta Airlines Business Elite new lie flat beds offered exquisite rest for long hauls and you arrive in your destination well rested. And what's a vacation without the pampering? My recommendation to all vacation afficionados is to check out boutique hotels through tablethotels.com and see their recommendations. Boutique hotels have been my guide to what I believe are the best choices so you get most out of your buck! Not only do they have the plush amenities, grandeur and comfort one looks for, but the rest one truly deserves away from the madding crowd.

Of all major cities in Canada, this was one place I had never been to. 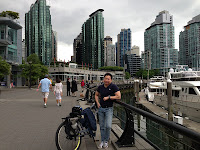 Arrived on time and checked into Loden Hotel. Situated right at the front of Coal Harbor is this beautifully and intricately well appointed hotel. The Park Vista room was not that large but the view of the mountain and the sea was spectacle to behold and a great way to wake to every morning with its double walled floor to ceiling windows.

Vancouver reminded me of Sydney, Australia. Laid back, quaint and quiet city, Vancouver, British Columbia was technically the migration hub of thousands of Hong Kong citizens right before the turnover of Hong Kong to China. Many of the Chinese living in Hong Kong in 1996 had feared that when the British colony would be handed over to China in 1997, there would be repression of rights. Most of the affluent had taken their money out of Hong Kong and infused it into this state in Canada. The large financial influx had made properties in Vancouver soar disproportionately to its current value.

Right at the back of our hotel was Coal Harbor. The hotel concierge offered bikes for free and Stanley Park was a must see area, especially on pedals. Food in Vancouver ranged anywhere from Asian to Western. But you could tell that there were mostly Asian restaurants on almost every corner, especially Japanese cuisine. I highly recommend Wingyo, a Japanese fusion restaurant and Yew (located at the Four Seasons Hotel) for great seafood.

Arriving on a weekend meant that most of the stores would close early. Sunday was dedicated to visiting the outskirts of Vancouver. And Whistler was a 1 1/2 hr drive from the city. Although this was summer in North America, the splendor of the glaciers with a Peak2Peak ride was the highlight of the stop in this lovely city of Canada. 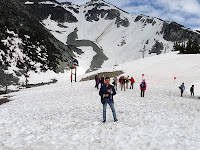 The last day was devoted to shopping and meeting up with Winnie and Jerry. The few hours of small talk on how life has been since they moved to Vancouver and how life is back in the Philippines went by so quickly. 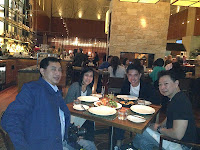 Our next stop was Toronto. On board a delayed flight of Air Canada, we arrived almost 7pm considering the time difference of the east coast and west coast. Which meant that by the time we checked into Le Germaine Hotel, there was really nothing to do already for the day wasted. The CN Tower was the first pitstop of this leg. Dinner was at 360C Restaurant, in what was once the world's tallest tower. 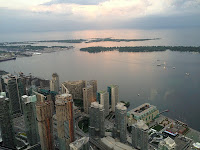 Toronto is more of a mix of eclectic culture and far warmer too. It was cosmopolitan to a fault because the city tried to be something different from the rest of Canada. The Eaton mall was huge. Casa Loma was historical. The St. Lawrence Market was perfect. And the Distillery District offered fine food and great art.

The final day was dedicated to going to Niagara Falls - the view from the side of Canada (which of course was more spectacular than the US side). Dags picked us up towards lunch time and it was a half day reminiscing old times and new chapters in our lives. 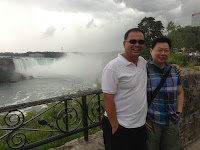 The highlight of this leg of our trip was crossing the Canada-US Border by land (and back). After Niagara, we headed off for some outlet shopping at Buffalo, New York, dinner at the Anchor Bar (famous I believe for it's SUICIDAL Wings), and yes, a bit of reminiscing for Bob who had once worked for HSBC and trained in Buffalo. We got back to the hotel almost 1030pm and started packing for our very early flight to the US.

We arrived in New York City early and a special thanks to The Chambers hotel for allowing us to check in early. After the laid back Canadian trip, arriving in the city that never sleeps had excitement painted all over our faces. While we darted off to meet separate friends on various occasions, we still kept a few days and moments to ourselves enjoying what New York City had to offer. And while this may be our umpteenth time to be here, there are still places where we have not seen. Whether it was SOHO, Midtown, Uptown, Central Park or the Lincoln Center, the company we kept was highlighted with one hell of a memorable weekend of shopping, eating, and sleeping! More shopping, more eating and sleeping in late at The Chambers was such a relaxing experience! The hotel is just a short two blocks from Central Park and unbelievably hip and cool. 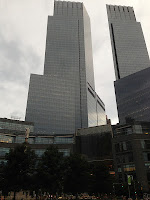 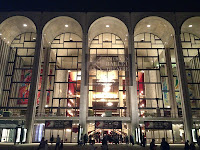 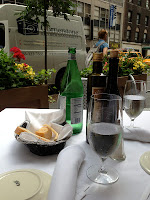 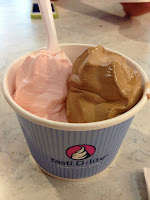 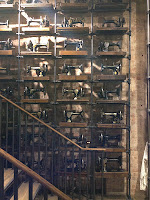 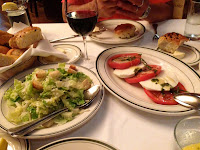 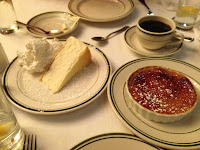 Topping it was the gay parade where you could palpably feel the celebration of freedom of expression regardless of sexual orientation.

I cannot thank enough Jojo and Charles who took time out for my crazy weekend in NYC. Jojo flew in from San Francisco just to meet up. Talk about jet setting. Both Jojo and Charles were my students in med school. Seeing how successful they are in their own endeavors puts pride in me that when people set out to seek their dreams, I was part of that journey. 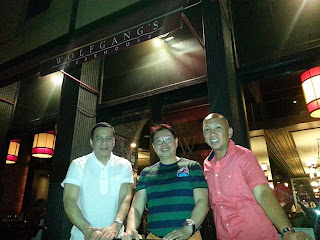 The best part of this vacation?

Let's put it this way. I don't have relatives in the US or in any other part of the world. But the tons of friends (not just acquaintances) that I have will always tell me that anywhere I will be, I have been part of someone's journey. As I said in FB, time is a luxury we can never purchase. And when people spend time with you, it defines the depth of your value.

Until my next trip, thank you to my friends for one of the best vacations I ever had.