Pork, the BIR and Justice in the Philippines 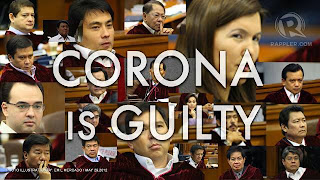 There's something awry in this picture. Former Chief Justice Renato Corona had said during his trial that he was subjecting himself to allowing the court to open his bank accounts as long as the other lawmakers were too. A year after his being ousted from the third highest position in the land, the same lawmakers that found him guilty are now embroiled in graft and corruption in what would be one of the biggest scandal in the use of the pork barrel funds allotted to the upper and lower houses of governance in the Philippines.

And that leaves a black eye in the President of the Philippines, where his passion to convict Corona seems to take a backlash at his own men who are now scrambling to deny or defend themselves in public because of Janet Napoles and her family's acquisition of illegal wealth at the expense of the Filipino people.

My niece is skeptical about the march. She told me that even if two million people charged to Malacanan Palace for this cause, the problem would not be solved. Over the weekend, I talked to some parents who are lawyers and they said that in this country, the truth is that justice is elusive among those who have the money to splurge for lawyers and connections in the military, police and other government officials. As Filipino citizens, we've been there, we've done that. I have friends who are more optimistic with PNoy. Seriously, with this latest scandal, my optimism has faded.

I was one of those that voted for PNoy because I believed in his parents crusade that the Filipino was worth fighting and dying for. But graft and corruption in Philippine Politics has become so entrenched in a web so complex that I just watch from the sidelines hoping that one day, some day, some ray of hope can come from the changes we so believe and fight for. Yet each election is the same. The trapos are still around. Their children and grandchildren have now become adults and run to take their places and entrench themselves in the complicated web of learning hands on how to keep their dynasties alive. And we can only have the Philippine electorate to blame.

Yes, the million people who will march tomorrow in Luneta will be mostly the taxpaying citizens of this country who are the most affected. While I am a doctor, I have retired from the academe and joined the pharmaceutical industry. And in my years in the academe and my current years in the pharmaceutical industry, I cringe at the amount of taxes I pay to the government. The chunk of hard-earned cash slips through my fingertips even before I enjoy the fruits of my toil. I always believed that while it was painful to part with the large chunk, at least it went to social programs of the government for reforms, education, and alleviating the poor.

When Kim Henares lambasts my colleagues on tax evasion charges, I cannot help but hate her. To those in government who have not committed a sin, they can cast the first stone. But even Madam Kim will agree with me that even her cohorts, those that work in the Bureau of Internal Revenue (Bureau of Internal Robbers as my friend would call them), and those affiliated with various government sectors have not brought changes to the various branches of government. Francis Tolentino, head of the MMDA for example had smoking bans in public places and jaywalking as initial initiatives of the government agency. Where is it now? The BIR is busy chasing the middle men who try to cheat the government from the taxes they are required to pay. Can you blame them if we don't want to pay because all the money that we make simply go to the coffers of people like Napoles and government officials and their families? What has she done to run after these lawmakers who apparently make oodles and caboodles of money from what we so painstakingly try to earn decently from our blood, sweat and tears? Where is her passion and conviction against people and government officials who steal from taxpayers hard earned money so that their children and family can afford luxurious lifestyles? If you asked me, these people and their family should be hanged in public. The temerity to spend what is rightfully not theirs from the get go.

Accountability, transparency and good governance are apparently not on the list of most of our public servants. They run for petty offices so that they can part with the largesse of funds that are appropriated for their constituents. As I would put it, "makapal talaga ang mga mukha nila", but they wouldn't care what words you choose to describe them. Even if you called them pigs or scums of the earth, as long as they financially gain from their positions in government, you can even call them the devil.

Many of my friends have migrated to other countries and for the very reason that they have found no hope in the Philippines. Those of us left behind are left with little choice - "maghanap na lang ng ibang raket" or join in an upheaval for change every time we elect a new president.

And believe me, it's not only tiring, but frustrating as well. The working class is left with little choice. You dance with the music or you just leave your family with no food on the table, no money for medicines, no roof over their heads, and yes, no education at all.

But I will make this message loud and clear to PNoy. My dear president, you have three years left to leave a legacy. I may not understand politics as much as you because you were born into a family of politicians. I have only this to say. You were not ready to take on the helm of president of the Republic of the Philippines. In all honesty, I seriously doubted your capability from the get go. But I took the chance. The chance that with your parents background for love of country who were willing to die for us, maybe, just maybe they passed the same passion and burning flame to you. At this point, doing what is right and not who your allies or friends or compatriots or family is what you were elected to do. You have nothing to lose by taking the right road or as you would call it, "ang daang matuwid". I don't buy the fucking claim of the NBI or other police officials that Napoles is hard to find. You are the most powerful man in this country and by all means, use your power and have some balls to go after the bitch and all her cohorts. If there is one legacy you can leave behind, it's earning respect not only for you, but for your family name.

If you need to die for your country fighting this crusade, so be it.

I like to congratulate the positive attitude of I.re. Think of it as living in Mars.

Why not ask Kim henares how much taxes were paid by her family who is the local distributor of citizen watch?