Why I will join the million people march 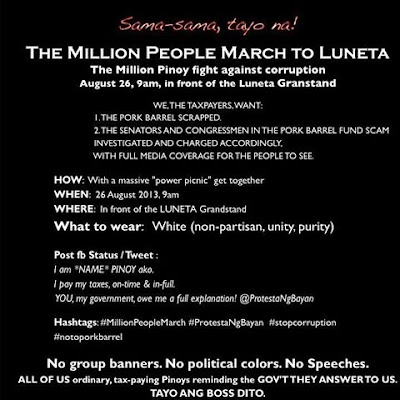 The Special Audit's Office report 2012-2013 is a 462 page report on the Priority Development Assistance Fund (PDAF) and the Various Infrastructures including Local Projects (VILP).

There are 70 tables including the definition of a soft and hard project, transactions denied by suppliers, documents purportedly signed by legislators and their authorized representatives, list of beneficiaries, suppliers that cannot be located or non-existent with some submitting deficient documents, persons connected to different NGOs, salaries and administrative expenses charged by NGOs, suppliers that did not reply but submitted questionable receipts, NGOs with legislators and/or their relatives as incorporators, legislators who denied signatures on documents submitted by NGOs, beneficiaries who attended the same or similar seminars/trainings and received multiple number of kits, projects implemented in the same barangays by different NGOs, funds transferred to three municipalities, projects with deficiencies, projects constructed on private properties, projects with excessive indirect cost, projects with erroneous indirect cost, vehicles included in the contract, LGUs with questionable transactions, LGUs with suppliers who are not fully reporting their transactions, items procured by LGUs that cannot be presented or accounted, to name a few.

The audit was conducted to determine:
1. the propriety of releases of PDAF and VILP by the Department of Budget and Management (DBM) and
2. the efficient utilization of funds and effective implementation of projects by the implementing agencies (IAs)
taking into consideration the menu of programs defined in the GAA and pertinent laws, rules and regulations.

What did the audit find?

The audit disclosed that PDAF and VILP were not properly released by the DBM and not appropriately, efficiently, and effectively utilized by the IAs. As reflected in the summary of releases from VILP provided to the team by the DBM, the P32.347B were released out of the allocation of 356 legislators and a certain LUIS ABALOS who is not, however, a member of the 13th and 14th congress received P20M for VILP.

As to the status of NGOs, a number of these NGOs are either unknown, or cannot be located at their given addresses, or have no traces of office existence, or addresses traced in a mere shanty or high-end residential areas without any NGO signage, or have given non-existent addresses, or while existing, have no apparent capability to implement projects of such magnitude, or were not issued business permits to operate during 2007-2009, or submitted questionable documents.

For example, the NGO SDPFFI received P581.359M with the address located in a garage of a residential unit in Laguna but certified by the Secretary of the Home Association to be unknown within the subdivision area. Or KKAMFI who received P526.679M gave three addresses: one is non-existent, the 2nd is a residential unit with the NGO unknown within the area; and the 3rd is a unit at Reliance Center Building in Pasig City. The NGO AFPI received P524.910M and the given address is a vacant lot storing various equipment. It was not issued business permit since 2004 to present but registered with SEC. The NGP MAMFI received P477.033M had a given address as a residential unit reportedly owned by the NGO president.

Around P123.005M was used by the NGOs to pay salaries and other administrative expenses, contrary to rules and regulations. For example, the implementing agency Quezon City provided to NGOs MDSF and SPFI. The nature of the expenses for MDSF was operating expenses in the amount of P2.921M while SPFI charged P12.269M to furnitures, meals and other miscellaneous expenses.

A number of NGOs were incorporated or managed by the same persons with a number connected to as many as six NGOs! Benhur K. Luy is the incorporator/COB/President of 6 IAs - TRC/NLDC/ZREC/NABCOR and incorporator/Board of director/stockholder for TRC/NABCOR.

Two hundred thirty other suppliers with transactions amounting to P689.818M could not be located at their given addresses, or have given insufficient or non-existent addresses. A number of these suppliers do not have permits to operate business, or have issued questionable receipts.

Items procured from C.C. Barredo Publishing House amounting to P541.742M consists of 4 to 5 volumes of manuals consisting of 100-104 pages costing P2000 to P3500 per kit written in English or in Filipino. These pertain to various types of livelihood programs such as raising livestock, farming, food processing, and the like which are already of common knowledge to an ordinary farmer. Validation conducted in Region V disclosed that a number of these manuals were even distributed to high school students who may not even be the right recipients of the kits.

Forty-six suppliers with transactions amounting to P787.161M that did not reply to the team have also submitted questionable documents. For example, Zynmil Agrisciences, Inc. for NGO BTLFI for the implementing agency BA-RFU III under Rozzano Rufino Biazon issued P5M. Zynmil has no business permit to operate.


These are but a few of the findings which are not published in the expose of the Philippine Daily Inquirer.

You can download the full PDF report and it's an interesting read because it covers all the documents of the filth in the pork barrel.

I wanted to puke after reading the document.

And yes, I had to go through the 462 pages to understand what the clamor for better governance is.

Apparently, this is as transparent as it gets. And to just brush aside the issue for the sake of hope and optimism has got to be the joke of the year. Anything this deep, this entrenched, and this foul, can only be redeemed by rendering swift justice. Even the friends and family of PNoy should not be spared.

I could not help pity the people ravaged by the three days of rain and flooding in Luzon, and Metro Manila - had the money been put to better use on proper drainage and relocation of illegal settlers, we wouldn't be in such shit floating away because of pork chop being spent for personal gains.

I support the MILLION PEOPLE MARCH. And if PNoy cannot address this problem now, with all the glaring facts and figures, there is something very wrong in his battle cry. As I always say, "KUNG GUGUSTUHIN MAY PARAAN. KUNG TALAGANG AYAW MAY DAHILAN."