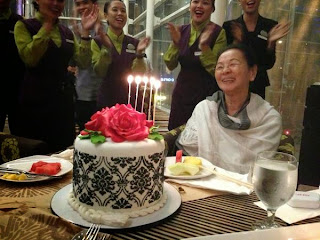 She is one of those senior citizens who have outlived more of my friends and her friends as well.

This is my second blog about the woman I fondly call INANG.

The woman who has provided me my day-to-day fears and inspirations on approaching the "senior citizen" years.

She is the woman who not only has stood by all of us in the family as the beacon of good, of guidance, and yes, of both dependence and independence.

Unlike most mothers who have established a career in the corporate world for themselves, my mother was a stay-at-home professional. As both I and my sister grew up, she was our maid, our driver, our cook, our teacher, and yes, our friend. She was the one person who knew what we felt even before the world knew about it. In her own small world, she shared her dreams and despairs with us.

When my father became ill and had to stop working after his debilitating stroke, INANG took the cudgels of being his cook, his maid, his driver, his therapist and yes, stood by him till the end. There was no day I could remember that my mom multitasked in a world that was not fair. Even from miles away during my fellowship in the United States, she would tell me how my father was and how one day, she too could go and see Boston. I felt the love between my father and mother. Even in sickness and in pain, there was love.

Like all of us, my mom had dreams. Not the grand ones where she would want to own a Prada or an LV. Hers were simple ones - of life well traveled, of life well lived, of a roof over our heads, of hot meals on the table, of the simple world of living life to the fullest and without regrets.

When my father passed away, she cried each night. I thought that his passing was a quick one. There was no suffering nor pain. During the wake, she would just stare at the coffin, wondering what life would be without him. She told me of stories of my dad's plans for both of them when they would grow old and it would just be the two of them. Then, she lost the only person who she thought she would share her life with in her old age. And all the dreams just crumbled.

And I was left to decide on how life would be with just me and INANG.

In the 20 years since my father died, it was just me and INANG.

I made it a point to make sure that Tuesdays with Nanay would be the story of her life. I don't work on Tuesdays just to be with my mom. Of course, it was less income, but eventually I discovered that not all the earnings of the day would compensate those precious 'moments' with mom. There was little I could repay her for raising me and supporting my dreams, when she gave up hers just to raise me and my sister.

Today, together with all the technological advancements, INANG still drives, is active in Facebook (and no, she does not Tweet...but I figure that someday Bob will also teach her how), still cooks, enjoys malling, plays Candy Crush & Bejeweled, enjoys making loombands, has a smartphone and yes, walks the dogs.

I make it a point that special occasions would be time out with my small family. My little way of reminding myself that what we give in life comes back to us the way we give. A gentle reminder that all things in this world will eventually pass but we can never relive the past. It's only TODAY that will make a difference in our lives and the lives of people we touch.

As we celebrate 77 years of INANG's life, I now know that those "moments" we spend with our parents are the most priceless ones they treasure. It's also the most important event in their lives as they travel the lonely road of their "senior" years.

Today, it's her time to SHINE!

I write with pride about a mother who has given everything unselfishly and forgiven and loved unconditionally so that we understand the kind of parents who raise us.

A life well lived is not one of material possessions, but one that is shared by the heart.