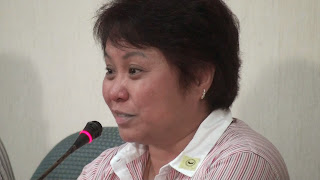 The Philippine Daily Inquirer ran a short and irritating article regarding the interview over Radyo Inquirer with BIR honcho Kim Henares.

Henares: ‘People are very demanding but do not want to pay taxes’ read the title of the article.

[This is the problem: the people want many projects to be implemented by the government. The demands are increasing and will not let up. That is what we are saying. For instance, if projects being demanded from the government are lessened, we can lower [our tax collection targets]. The people are very demanding. They are demanding but they do not pay their taxes. Where will we go from there?]

After reading this short, idiotic piece of trash, I was wondering where this woman even has the temerity to go mouthing on-the-air regarding tax collection.

I agree with her that people are very demanding. We demand transparency from the government. She's forgetting that her bosses are currently embroiled in too much shit - the pork barrel anomalies, the controversial DAP, the ghost projects - not to mention the fact there's so much graft and corruption even within her own agency. If she had all her people undergo a lifestyle check, I am sure that there would be less than 10% of the current employees in the BIR that would pass.

I disagree, however, that all her agency is tasked to do is collect taxes and that she needs to fulfill that goal whether she exercises duress on the taxpayers or not. You cannot justify what you do if the other branches of government are out there splurging your hard earned money into projects profited by government officials. And there's too much graft and corruption involving peoples' money which are not even supposed to be pocketed by government officials. She needs to remember that the branches of government are a unit all together. You cannot justify what you believe is morally right to you when you are collecting for people who malverse the very funds you collect from our sweat and blood.

It's called co-habitating with the enemy. You cannot profess what is morally upright when the other branches you work for are mired in graft and corruption. In short, wala kang karapatan magyabang kung ang mga kasama mo ay magnanakaw. While she is to be applauded for her bravado stand against the tax evaders, I have yet to see the Supreme Court actually side with her in the decisions she and the BIR have made against the heavy weights of tax evasion. And I have yet to see her flex her bravado on colleagues of hers in government (from the baranggay servant to the traffic enforcer to the policeman on the street to the general who lives with the rich and famous...oh did I forget anybody?) on massive corruption and tax evasion issues among the ranks - let's face it, the people in government should ALL have their lifestyles checked!

There is really nothing much to pride the BIR in terms of how they collect the taxes from the people. To say they are efficient is an understatement. They have made things more complicated for a reason I cannot comprehend. The actions of the BIR are based on distrust with the taxpayers. I get that. I would have admired her more if she made it her mission to simplify tax collection. But I guess that's beyond her brain capacity and not within her pay grade to make things simple.