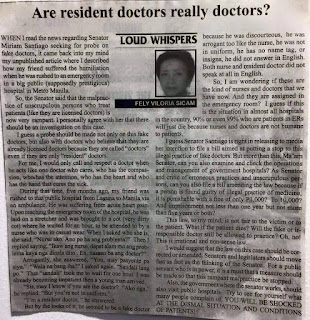 After your column LOUD WHISPERS with the article entitled "Are resident doctors really doctors?" got published in the Mindanao Times a week or so ago, two things happened. Your column became viral on social media. And the once unknown Mindanao Times suddenly became infamous. Thanks to you.


But let me clear the clutter.

By now, you know that your column had incensed practically the whole Philippine medical and nursing profession. And you will forgive me if I say, rightfully so. I was looking for the kindest way to let you know how badly written that column was. But the Rappler had published a well written piece by a former UP-PGH graduate by the name of Dr. Adrian Rabe (http://www.rappler.com/move-ph/ispeak/100143-open-letter-resident-doctors utm_content=buffer26be9&utm_medium=social&utm_source=facebook.com&utm_campaign=buffer). He very kindly put into perspective the enlightenment that you needed on your question whether resident doctors are real doctors.


With that said, I would like to let some of my colleagues understand the field of journalism or publications. Your article is a column. As a columnist, Ms. Sicam is entitled to voice her opinion - good or bad, right or wrong - it's her opinion. That is why columns usually appear on the Op/Ed or otherwise known as the Opinion/Editorial page of the newspaper. Your being a columnist provides you with power. Used appropriately, your power of writing can change the landscape of healthcare in this country. Unfortunately, like many other two-bit columnists in this country, you managed to utilize that power to the disadvantage of the people. It was, self-serving.

That, my dear Ate Fely, was why the response to your column was a violent one.

As a former Varsitarian (Official Student Publication of the University of Santo Tomas) staffer, I learned that accountability, responsibility and integrity are the hallmarks of a true journalist. Someone who would check facts first, balance his/her opinion, and ultimately be accountable for what one writes.

I do not hold you solely accountable for the mess that you're currently in. The editor-in-chief and publisher of the Mindanao Times are equally culpable for the backlash that you're receiving. After all, your boss has the right to publish your article or not. He could have called your attention and discussed with you the merits of publishing the badly written and poorly edited column you wrote. The mere fact that he/she decided to publish your column and do a Pontius Pilate later on is proof that he didn't have enough spine to back you up when the going got rough. In short, he decided to crucify you. That to me tells me what kind of a douchebag your editor is.

In all honesty, he was equally as culpable as you. In the publications world, it takes two to tango. The writer and the publisher (unless you are both).

I recently found out that you had written to your Acting Editor regarding the atrocious comments you've been receiving on social media (Facebook most especially) and the letters to the editor of the Mindanao Times. 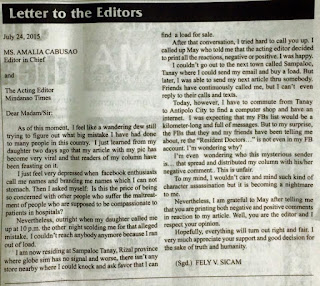 Do I commiserate with you? Sadly, no. While I am trying to understand that what you did for your friend was through the goodness of your heart, you did not dig deep into that very heart to understand the travails of healthcare in the Philippines. There was no injustice done by the resident or the nurse on duty that fateful day you brought your friend to the ER of PGH. That is the way the public health system is in the Philippines. If it will make you feel better, I have a colleague who went to the extent of suggesting that there should be a law that requires ALL GOVERNMENT EMPLOYEES AND OFFICIALS UP TO THE PRESIDENT OF THE REPUBLIC OF THE PHILIPPINES to be seen and confined ONLY at government hospitals so that they have a reality check every now and then, and that the public healthcare system be upgraded for the majority of its citizens. And I totally agree!!! As to how many government officials actually have the balls to make this into a law, this has to be an acid test for the government.

After reading your letter, I can only say that you are not a writer. Not a journalist. And never will be at your age. I will offer you one advice - retire. It's not your cup of tea.

Maybe Madam Fely should just blog so she would have a place to rant. But unfortunately, even the serious bloggers that I know are responsible enough to think carefully of what they post online.

I'll probably write about this too, since a lot of doctors have started voicing out their opinions.

Thank you for your comments. Clearly, the subject matter of Ate Fely was not about being true doctors and nurses in our hearts. I think you will need to read the articles over and over again to understand what she was trying to communicate.

With that said, the final word on this is that doctors and nurses are NOT saints. Not even the pope is infallible.