The Forbidden Kingdom...reviewed - the good, the bad, the ugly 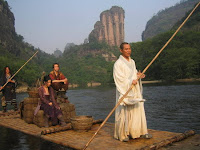 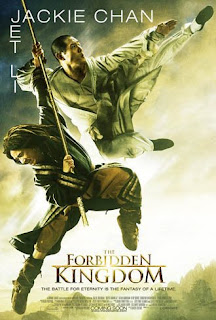 I am an avid fan of Chinese martial arts.  And having both Jet Li and Jacky Chan come into one movie was something I wouldn't miss. Enough said.
THE GOOD AND THE BAD
The film is about an American teenager who is just obsessed as I am with Chinese martial arts.  Jason, the protagonist in the film is from South Boston.  He frequents a chinese run shop and in the process of his travails with thugs in his neighborhood, gets transformed to China, in order to fulfill a 500 year old prophecy in freeing the Monkey King.
The action packed film is not what I expected from an American made film, as it reminisced a combination of the Karate Kid and Crouching Tiger, Hidden Dragon.  It had a lackadaisical story, but who cares?  The fight, flight and digitalized scenes were awesome!  I read the reviews of some "Hollywood" moguls, but who cares what they thought about the story line?  They're actually syndicated and many get paid to give good reviews.
It's currently showing in 100 movie houses in the country and you've got to watch it on large screen to appreciate the digital effects which were actually done on Apple's FCP (Final Cut Pro).  You can log on to http://library.creativecow.net/articles/saeed_zed/forbidden_kingdom.php to know more about the film's productions.  I love Apple's cutting edge in film production. The more reason why everyone should get a Mac when choosing a computer.
AND NOW THE UGLY
As a final note,  I couldn't help but make the special comment on how the movie houses allow children less than 5 years old into the movie house.  Just for the record, I had to shush a parent after painfully trying to concentrate on the movie because her 2 year old son was running around together with the nanny inside the theater, moving back and forth from my view.  The son was not only irritating but so was the mom who told me to get out of the movie house if I couldn't stand her son's noise!  The temerity of some people!
Instead of focusing on pushing and shoving on who is right or wrong, let me just say that it is the DUTY of theater owners (paging Alabang Town Center, again!) to minimize their GREED by putting restrictions (read MTRCB) on the appropriate age for allowing children into the movie houses.  Let's make it clear on the OBJECTIVE of watching a movie is to get ENTERTAINED and not IRRITATED.  No wonder piracy of movies is so rampant in this country.  You can best appreciate the movies in the confines of your home because some uneducated nincompoop reasons out that their sociopathic son has the same right as everyone to watch a movie that the infant could not comprehend.  So it was okay to make noise, and never mind the other people in the audience.
The movie could have been more enjoyable, had the distraction been minimal.  In this case, I believe the family of the rowdy child should have just been transported into a forbidden place and that movie houses should be a forbidden kingdom to the kids not old enough to understand the film and only go to the movies because their parents want to.
Posted by Kid at heart at 9:25 AM