JocJoc Bolante...the joke's on us! 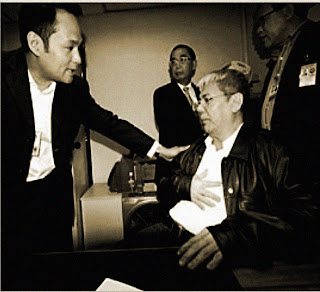 So Jocelyn "JocJoc" Bolante, the supposed mastermind of the Fertilizer Scam amounting to 728Million pesos ($15Million) in 2004 is back in the country called the Banana Republic!

If everyone will recall, the allegations of the Fertilizer Fund for the farmers was apparently used by JocJoc (sources have it was that FG had asked him to use the money to "spread" it around to government officials) to assure that Ate Glue would win the presidency.

Whatever! After so many years in the US, after the US justice prevailed on the escapist acts of Mr. Bolante where he was unable to use his money and influence to make sure that he stay in the US, he is back in the Philippines!

But wait. In this country of grease and monkeys, something was amiss. Upon arrival from a Northwest Airline flight from the US, he complained of chest pain (drama queen!!!) and tadahhhhh ... is whisked off to St. Luke's Medical Center (where the first family is observed to have many connections among its doctors and administrators). JocJoc suddenly has a room (suite, ehem...) ready and that's it folks - the poor guy needs to rest, he needs to be worked up, for health reasons he's shitting yet in his pants so he needs private time because he's stressed and anxious and damn this government.

You can't help but wonder how the drama unfolded and who the director and producer of this stunt is. But it's a no brainer that someone in the highest place in government had something to do with his being given the red carpet treatment! JocJoc WAS only an undersecretary for the Department of Agriculture. He wasn't an administration official that held the highest place in the land. Just like Garcillano (remember the Hello Garci scandal?), they were nobody! Nobody! I mean, how can anyone like JocJoc who's a mere undersecretary of agriculture, afford an 80M peso house in Ayala Alabang? Think about it. This government of GMA is so fu**ed up that you can smell the shit when the plane lands in this banana republic. What's so pathetic is that the middle class is more preoccupied with the economy and callused with all the graft and corruption of the government officials, the generals, and whoever has access to the coffers in government that they have been numbed.

So much drama! The Euro Generals being eclipsed by the Joke - JocJoc. And one episode not having and ending.

There is, however, a central plot - GREED! And so much of it!