Thieves...at a time of poverty 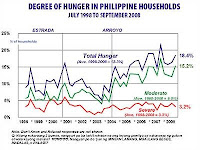 As this blog is being written, Ate Glue is in Beijing. According to the newspaper reports, while Ate Glue may not be popular in the Philippines, she is considered an empress in China. My comment - the Chinese can have her as their president. My dear Chinese comrade-in-arms, you can have Ate Glue!

Anyways, let's cut to the chase and let me update my readers on the state of the nation. F**k the people that run this country. The government officials in this banana republic seem to be enjoying sucking up to Ate Glue for whatever penny that can extract from her highness, since she has only a little less than 2 years left in office. So her court jesters seem to be in high spirits and even the honorable "tong"gressmen are just shitting in their pants, not minding the mess they are making nor smelling the shit they are emanating from defending the palace.

Aw common people. Isn't this the very reason why we deserve the kind of government we get? Why every Juan, Pilar and Pepe are flocking out of this country? Why we, as a Filipino race do not even deserve to be looked up to in international communities?

We allow ourselves to get trampled upon. We allow ourselves to be shitted on. We don't care how the people in government beg, borrow or steal. We are a pathetic race and we deserve what we get from whom we voted for. We go on our every day lives and demand from government to bring down the cost of fuel, electricity, basic commodities, rice, text message charges, medicines...yet I have yet to hear our country men rise up and demand from government, their moral ascendancy from all the scandals that are being charged to them.

The "Euro Generals" escapade is the perfect example. Why Ate Glue refuses to touch them is beyond my comprehension. It's probably the fact that there is honor among theives...and that is best exemplified by this case scenario.

Imagine that the money changer who had exchanged the peso into euros for General de la Paz, had come out to say that since early August of this year, the 6.9Million pesos was already with the generals because every week, someone would come to his money change shop to exchange for 3,000 - 5,000 euros - until all that 6.9Million pesos had been transacted! And the reasons that de la Paz had given, together with Puno and the other generals had varied from day to day. Now they are singing the song that they brought the money to Russia to buy spy gear and weapons ----- DUHHHHHHHHHHHHHH!??!?!!?!? Look who's being taken for a ride. Tweedle dee doo and tweedle dee dumb...

And because Ate Glue had stated that she puts her full trust in her generals IN SPITE of this glaring fiasco, which has Senator Miriam under full throttle against the PNP force (and I hope she does trash Puno to pieces), puts the moral ascendancy of Ate Glue in question. Why and whom is she defending? To the generals, their act of impropriety or theft, let's not be coy about the incident, is simply a "me too" act. If Ate Glue can steal from the coffers of this land, why not them.

In actuality, Ate Glue is to blame. She did a really lousy job at being discreet and she used the money of the Filipinos to cover up all those f**ked up deals she and her men made. At a time when more Filipinos are hungrier than ever, accentuated by the worldwide economic meltdown, it is despotic to be robbing at a time of poverty.
Posted by Kid at heart at 1:20 PM