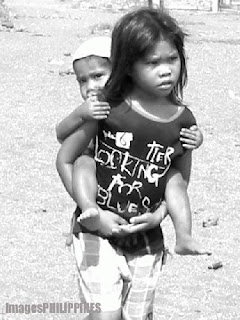 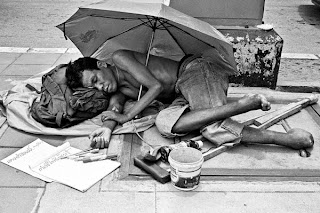 You can find them in the most decrepit area of the metropolis and most probably in every province in the banana republic.

Five years ago, I was discussing with a friend why the OFW movement was a bane rather a boon to the country. While Ate Glue and her economic wizards were busy promoting and championing OFWs, I was frowning at this scenario. To me, this was desperation on the part of the government. It was shouting in our face - WE HAVE NOTHING TO OFFER YOU IN THIS COUNTRY, SO GO, LEAVE, AND SEND HOME YOUR DOLLARS!

My opinion this may be too simple economics and mathematics put together. And perhaps I am limited by the fact that I probably did not go to Georgetown for an economics education, but analyzed this scenario based on logic.

Here's my take. If you simply draw a pyramid and stratified Philippine socioeconomic status according to three classes - upper, middle, and lower class - you'd probably see the rich occupying less than 5% of the tip, the middle class somewhere around 20% and a large 75% living below the poverty line.

Exaggerated? Let's look at facts. (All data highlighted and in asterisk (*) are from the PDI's editorial. I revised a few figures but basically it sums up what I wanted to emphasize 5 years back.)

What was responsible for this staggering decline in number? These figures wouldn't have been bad had the middle class expanded.

Where did the rich and the middle class go? Most of the middle class have found a way out - give up on the country and migrate to Canada, Australia, the US, or some other land of milk and honey. The rest of the middle class and the rich have suffered setbacks in business with the last economic crisis because of Uncle Sam, putting them into a category one or two notches lower. The poor have nowhere together because they're already at the bottom of the pyramid.

At the rate that this statistic keeps going, the Philippines will be left behind and live up to its expectation as the "Poor Man of Asia". Our neighbors have done much better. Isn't it envious that a country like Singapore that has about 4.7Million people has 93,000 millionaires (11.4% of Singaporean households). Millionaires here are counted in USDollars and excludes real property and other non-liquid assets like paintings, cars, etc. The Boston Consulting Group pointed out in their recent study that 60% of households in the island nation had bankable assets worth between US$250,000-US$1M. What was astonishing is that it happened at the same year when the country's GDP shrank 2.1%!

Now the government officials will say, let's not look at Singapore or Malaysia or South Korea. Why not? We were once upon a time one of the most lucrative nations in Asia. The dollar to peso exchange rate was $1 - P4. We were well respected and foreign companies looked to the Philippines when it came to dealing with business.

While I have nothing against OFWs, we should hang our heads in shame for saying that they are the modern day heroes! This, to me, is a pathetic excuse for no progress in our country because of greed and corruption.

The other day, the Philippine Daily Inquirer (PDI) came up with the net assets of our congressmen. Over 230 of them had assets over P1M. This is from people who make less than P50,000 a month gross income! Even if they did not spend a centavo, presuming they don't even eat or drink or breath, one cannot help but deduce that they get all their money from conflicts of interest in business and their government positions. It is no wonder that Pinoys jockey for top slots so that greed and graft and corruption remains thriving and alive and well in the banana republic.

On my flight back from a business trip in Singapore two weeks ago, there were 3 Filipinos on the same flight back. Deported. I was sad and there was a part of me that was holding my Philippine passport in shame.

What has happened to us as a nation? Now that I share with you some data, which category do you now realize you belong to?

For all the sins of our politicians, this is our karma. If we don't address this issue now, in the next 5 years, I am willing to make a bet that this statistics will turn for the worse. Slowly, but surely.

Five years ago, I told my friend, when middle class begins to fade, and the gap between the rich and poor shrinks so rapidly this that the middle class that serves as buffer to the large differentiation becomes so small, it is time to say goodbye to the country. This is the best recipe for a revolution.

For the many decades that the poor have suffered, it will be vengeance time.
Posted by Kid at heart at 11:37 AM