For the love of drugs 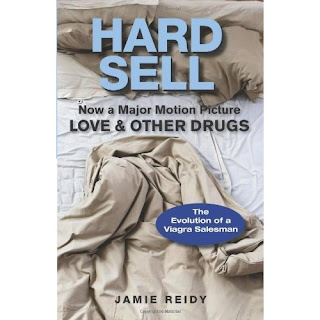 At Kinokinuya in Singapore and chanced upon the paperback "Hard Sell: The Evolution of a Viagra Salesman" by Jamie Reidy.

This is a true story in the life of Reidy, a former medical representative from Pfizer who tells the whole world boldly of the realities of the pharmaceutical industry and the dealings and relationship of the industry with doctors. Reidy is a story teller, while albeit, at times the story drags on and on (and we may not be able to relate to the story in some segments as Indiana and Fresno are particularly not within the radar of even the most rural Filipino), the humor in his storytelling is somehow still sustained.

It's actually a good read and while some of the doctors (and med reps) in the Philippines may be alluded to in many of his escapades, the shocking revelation of the pharmaceutical business is a wake up call to the paradigm shift that the industry must take on this day and age where "dealing" with the industry and "conflicts on interest" can pose ethical problems in clinical decision making of the physician.

And if you're the kind of skeptic who clearly has doubts on his doctor to whatever he/she prescribes or how much he/she charges for his/her professional fee, well this book has clearly affirmed that doubt - that there are doctors who collude with the medical representative, anywhere from getting free samples, free trips or even free meals.

Reidy expounds on his having to detail Zithromax, Zoloft, Zyrtec and Diflucan as a prelude to his becoming top salesman for Viagra. He does this with candor and compares the extensive "brainwashing-our-product-is-the-best-supergood-do-it-all-cure-it-all-drug" training programs of Pfizer reps. How difficult it was to convince doctors to shift from Biaxin (Klaricid in the Philippines) to Zithromax, how doctors talked about sweet deals before shifting from Prozac to Zoloft, how ironically the staff of Dr A would be hungry 24/7 waiting for the med rep to bring a pizza or some doughnuts so that he can get to cover the doctor that day, and so on...

Then comes vitamin V. A drug that was supposed to resurrect the dead - penis, that is! After extensive training on "when, why, how, who and what" to use Sildenafil citrate (Viagra) for, he tells us how strange it is that doctors become suddenly become accommodating. "Where is that med rep that details Viagra?", "Where is the Viagra boy?", "Where are the samples?"...never was he been more astounded with a drug that required a lot of detailing on safety on us was so much demand that people were just craving for it, without having the need to listen to the dosage and indication - from the doctor to the 98 year old across the street! Even the guy that had strict "no bathroom privileges" were begging to get a pop to pump that pathetic useless piece of appendage that would not stand anymore! Even the women wanted to use it and the young men started experimenting with it to get stiffer boners, hard as a beer bootle when you flick your fingers against the bottle! And so the discovery of the century - getting those dead boners - suddenly had a life!

Reidy resigned from Pfizer in 2000 and joined several other pharmaceutical companies before his book became popular and before it became a movie. While the first 30 minutes of the movie is related to the book (and lambasts the shennanigans of the pharmaceutical company and the doctors), the remaining 60 minutes is fairy tale and not based on even the life of one Jamie Reidy. Starring Jake Gyllenhaal and Anne Hathaway, "Love and Other Drugs" debuted in the US in November 2010 and will show in the Philippines on January 26, 2011.

I don't think the movie will really create a massive impact (hopefully not), and the movie does not do justice to the paperback story. But I think this was intentional so that there would be minimal impact on Pfizer and the pharmaceutical industry and the backlash against the physicians would be awfully small.

Then again, it's stories like these that tell you how it is and what it is that make people believe that a collusion between pharma companies and physicians actually exist and that there is change of hands in terms of favors rendered for favors received...


Love and other drugs Trailer 2
Uploaded by teasertrailer. - Full seasons and entire episodes online.
Posted by Kid at heart at 1:04 PM