Violence, violated and why I believe in the death penalty 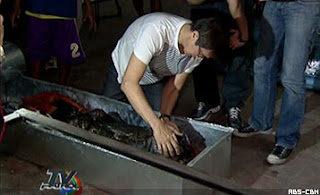 So we don't live in a perfect world. Is there anything wrong with wanting to?

Have you ever felt being violated because of a crime committed against you?

I have. I've had a gun poked in front of my face by some drunk bodyguards of a ConCon delegate (during the Marcos era) after they bumped my car from the back. They told me to say it was my fault or that I would be found among the salt mines. I pissed in my pants out of fear. When the cop arrived he asked what happened and then took me to the precint but not the burly idiots. He let me go after I told him what happened. I was so shaken up when I arrived home and when I told my parents about it, they were infuriated. I couldn't sleep and kept thinking - what if? I never took the same route again. It took me a few months to shake off the feeling, but I could never forget at staring a gun in my face.

When I was fresh out of medical school, I served in one of the government rural centers as part of the Marcos' program where where it was mandated that doctors serve in a rural community for 6 months after their internship. One day, after seeing all the patients in the health clinic, one of the patients had requested for some free medicines. I stood up to go to the medicine cabinet and left my bag for a few seconds, got the meds she requested, gave it to her. I saw a few more patients then left the center to meet up with my mom. When I got to where my mom was, I couldn't find my wallet. Gone! Money. License. Cards. Everything!

I was angry and I felt violated. It was an unforgettable feeling. I had sleepless nights thinking about it. Like a bad movie, it just kept playing over and over and over again in my head.

A few weeks passed and life was back to normal. Or so I thought.

Living in the Philippines is like putting a gun to your head. It's a Russian roulette with life.

During my residency training, I had felt the violation again. While doing a bone marrow aspiration for a charity patient, I left my bag by the door. It took less than 5 minutes to finish the procedure...and my bag - wallet and all - had disappeared. A few weeks later, all my cards and license were strewn in front of the house of someone who contacted me after seeing the address on my license. But they were useless already by the time they were discovered. I had felt so much anger and so much pain. It was reliving a nightmare over and over again.

And the cops could not do anything. Report it. Blotter it. And then that's it. No response or feedback again.

A year after we moved to our house, two thieves had broken into our home and beat up our maid. It was good that they were caught in the middle of the robbery. But we were shaken. Even in an exclusive village like ours, no one was spared from crime.

The recent spate of killings over carnapping incidents which occurred in a 2-3 days span sent shivers up my spine. Evangelista and Lozano were found burned and shot with bullets through their heads in some deserted place in Central Luzon. Both were used car salesmen. Both ended up dead in the most henious way.

When I read the news about these grizzly killings, I recalled what one of my patient's mother told me. A few years ago, they bought a new Pajero. It was only a few days old when it was carjacked right in front of their garage. Some men came in, pointed a gun at the head of their daughter, pointed a gun at the husband and the SUV was gone in 30 seconds. When they reported it to the police, the cop just replied - "since your car is insured, the insurance company will pay you the full cost of a brand new car. Just forget about this one. You wouldn't want the thieves to come after you and your family."

SANAMAGAN!!! THIS IS THE KIND OF POLICE THIS COUNTRY HAS!!!

And I am sure that the cops are in cahoots with the hoodlooms. While I cannot say that all cops are bad, I firmly believe the bad cops outnumber the good ones. I base it on experience. You get death threats each time you expose a rogue cop. They know who you are and where you live. With reasoning like this and no follow-up on crimes, you get the feeling of helplessness. Worst is how they reason out. That the current scenario is that the number of cars that are stolen are much lower this year compared to the same time last year! Did I get it right? My God!!!! With this kind of reasoning, it was tantamount to saying that "it's okay to be poor and hungry, there were more starving last year!" This typical answer from government officials and cops and military personnel is moronic!

While the church and the sorry asses have their hearts bleeding out against the death penalty, saying that it is anti-poor and that there are a lot of innocent people who are sentenced to die because they were wrongly accused, I can only reply that it's not the punishment that's the wrong solution. It's the judicial system! There is something very wrong in our judicial system and it makes me want to puke that even PNoy with all his want-to-do-good and be-good attitude has got his brain all warped up in order to please the church and the faith.

I know that I may strike a few sensitive chords here, especially among those who would die for the faith and for religion, but this is a personal opinion. While imposing the death penalty may not be a deterrent to crime in the Philippines, it is because we do not impose the punishment to the full extent.

I remember that Marcos sent a strong message when he had a drug pusher publicly executed by firing squad. For awhile, drug pushing was at it's all time low. Today we are the drug mule mecca of the world!

One can debate the pros and cons of the death penalty. I am sure though, that until you've stared the end of the barrel of a gun in your face and watch your life go quickly by, you don't have the right to any opinion on this matter at all. The feeling of being violated because of violence can only be solved with "an eye for an eye, a tooth for a tooth".