Postmortem of a revolution 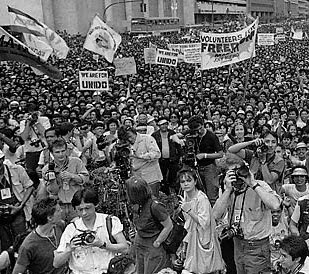 I was mulling on whether to post my next blog on Philippine politics - again.

There's so much more to blog about in Philippine politics. After awhile, it gets to be tiring. I guess I'm part of that crowd that lost the cheers of the EDSA revolution. The Philippines should be proud of what it started globally as a seemingly good trend to overthrow "peacefully" an unfit government official. But all the chutzpah died after awhile. We did another EDSA II with Erap, but the next president wasted the efforts and threw away the meaning of justice served. As the late General Angelo Reyes says it, "weather weather lang yan".

Like so many of our countrymen, justice has remained elusive for the run of the mill Juan de la Cruz.

Millions of pesos are schemed off the coffers of the motherland for corruption in all branches of government.

I remember a few years ago the mother of my patient had told me how their car was taken at gunpoint in their own garage in their home. She brought home her daughter from school and as they got into the garage of their house in Quezon City, a man and his cohorts poked a gun at her, at her husband and yanked out the kid. In less than 60 seconds, their brand new SUV was gone. They reported it immediately to the police. The response of the cop was "it's brand new and insured. Let it go. You'll get a brand new car anyway because it's still fully covered. Rather than make the thieves come back to harass your family."

In the subdivision where I live, there are a lot of government officials and retired military officials who reside there. I do not mean to brag. But in the area where I live, the upscale neighborhood is not affordable to the ordinary person who makes less than P100,000 individually a month. That kind of money cannot even buy 5 sq m of prime property in our village. And yet their lots are bigger than ours with sprawling gardens and swimming pools. So much for lifestyle checks in government.

At the mall, you see a government official with his family and bodyguards in tow on a spending spree. The wifey is on a shopping binge in LV while the husband is hoarding several shirts at Lacoste and Burberry. The kids are at the Mac store buying a laptop each. Either they hit the lotto the other day or someone just gave them their share of the pie from the last shady deal.

On the plane, you have another government official with his family all in business class. With a salary of P50,000 a month, you could just imagine how he can actually afford to pay for 7 business class tickets to the US! And don't give me that crap that it was paid for in miles!!!

The truth of the matter is, after 25 years of the EDSA revolution, I find nothing to celebrate about.

The old players are still around and everything is just political mumbo jumbo. The idealism was lost in the 25 years that catapulted the Philippines to basically a country that exports its people to war torn places because we cannot provide better pay and job opportunities to Filipinos in our own motherland. While we have become the BPO capital of the world, we have also managed to tip the scale with the most number of drug mules and human trafficking in Asia (if not in the world).

And scandal after scandal has not seemed to paint a rosy picture of the Philippines as the destination to go to. While the picturesque beauty of this country is one of the best in the world, the many efforts at selling us as a tourist destination is hampered by so much crime that not even our own citizens feel safe in our own homes or tourist spots.

Even in my own clinic, there is no month that goes by without my having to fill out forms that my patients will need as requirements for their migrating to another country. When I ask parents why they decide to leave, they only reply that this country is hopeless or that it's for their children or that they need to start anew without having to raise their kids in this kind of hopeless environment.

Where every game show on television shows you to what extent the Filipino would go to just to bring home money. Whether they sing, dance, look stupid or even put on a sad story of how they buried their whole family or how far they traveled just to be in the game show or how pathetic their lives are, the one day shot at fame and hopefully fortune is all the hope that they have.

Where people will audition for supposed talent, even when they are simply laughing stock of a talent search. Where all the poster boys and girls are willing to shed less clothes if only to become an overnight sensation even when all the talent they have is but a face and a crotch to show.

Where we begin to acknowledge foreign born Filipinos as Filipino-Canadians or Filipino-Chinese or Filipino-Japanese or Filipino-Brazilian or Filipino this and that, so that we can bring home some recognition simply because we have a sore lack of authentic talent back home.

Where we have no regards for rules and laws and are willing to look the other way in exchange for money. Where the number coding scheme of the MMDA is really against the rights of car owners and is a source of corruption and greed from the lowly traffic enforcers engaged in mulcting the drivers rather than paying attention to traffic on the roads. Where you can get a professional driver's license even if you can't read or write. Where you see children not only smoking but selling cigarettes as well. Where the sign that alcohol is served only to those above 21 is simply a suggestion and not a rule. Where each law can be so twisted that even a lowly traffic enforcer or barangay tanod is able to provide a steady source of income through pay-offs.

Where have we gone wrong? What has the revolution for democracy at EDSA taught us?

Someone told me that with the EDSA revolution, we have had better opportunities. She was speaking from her perspective because her family happens to be rubbing elbows with government officials on various government infrastructure projects. But 70% of the Filipinos who still live in proverbial poverty do not agree with her. While it is true that we are at pace with the world in terms of technological advancement, we have remained lacking in basic needs for our Filipino citizens. And other third world nations have not caught up with us but advanced in gains over the last decade. And we are struggling to catch up from behind.

Twenty five years. Graft and corruption ridden, we seem to be back to where we started.

I guess the Filipino people just didn't get it. The EDSA revolution was not about overthrowing a dictator. Nor was it over Ninoy Aquino's death alone. It was supposed to overthrow the greed and corruption ingrained in every Filipino that desired for a true moral change.