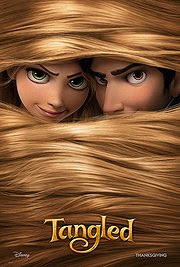 The start of February was an usually busy month. The whole week just flew by so quickly. After giving 3 talks in the Pediatric Infectious Diseases Society of the Philippines annual meeting and a talk for the Merck Meetings, and sitting as panel in the UST Graduate School Colloquium, I found myself stressed and weathered out in the first 5 days of the week of February.

Even the Chinese New Year was greeted by a peck on the cheek for my mom and a quick send of SMS to my partner, relatives and friends.

This is my first blog entry for the month of February and while I try to compose an upcoming blog for the upcoming Valentine's Day, let me just give a quick and short review of the Disney movie "Tangled" which my partner dragged me to watch after this horrendously hectic week.

I am basically a Kid at Heart. If there is something that makes me feel relaxed and carefree, it's bringing back childhood into my life. Basically, at our age, physically transporting ourselves back in time is impossible. Even all the Lancome, Shu Uemera, Philosophy Miracle Worker do not seem to be doing a rejuvenating job as well as I expected. Nevertheless, Hope in a Jar will remain the tall order of the day as the stress factors taking a toll on maintaining a youthful looking skin seems to be heading for Botox valley.

Then there is being a child all over again.

The weekend was off to the movies, even if it meant that after speaking and attending a wedding reception, we would have to watch the last full show of the movie.

The story tells of an old woman Grothel who chances upon a drop of pure sunlight that hits the ground and an enchanting flower with magical powers blooms. She sings to the flower and is able to make herself reverse her age back to her youth (now talk about the true fountain of youth!). She keeps this flower hidden from all so that she can stay young forever.

One day in the Kingdom, the Queen falls ill while she is pregnant. None of the medicines could cure her and the soldiers are sent out to look for the magical flower. Unfortunately for Grotherl, the flower is found and brought to the palace where it is made into broth. The Queen recovers and gives birth to Rapunzel, whose hair of gold would bring magical cure to almost any infirmity including resurrecting someone from the dead! Grothel finds Rapunzel and snatches the baby from the palace. She hides in the forest in a tower and raises Rapunzel on her own.

All the palace soldiers are unable to find Rapunzel and so the devastated King and Queen send out thousands of floating lanterns into the sky hoping that one day their princess would return.

And as Rapunzel grew up together with her pet chameleon, Pascal (what a cute creature) alone in the tower, she could not help wonder why on her birthday she would see those strange floating lanterns in the sky and where they were coming from.

Of course there should be a prince charming. In this case, it was a thief in the alias of Flynn Rider (real name Eugene Fitzherbert) who stole the princess' crown from the palace in the style of Mission Impossible. His run off with the palace guards and Maximus (the horse that acted like a dog) had led him to the tower where Rapunzel lived.

Fun filled, witty, excellent script, beautiful music and one helluvah ride in this animated tale that not only enchants and captures the hearts of even the seasoned viewers. I found myself transported into my childhood days, this time marveling at the animation, romance and comedy that only a Disney film can give.

It was one of Disney's finest moments and while the 3D movie may be a bit steep for the average Filipino viewer, I strongly recommend that this movie be seen in 3D so you can transport yourself back in time, and feel part of Once Upon a Time...all over again.

See you at the movies!!!