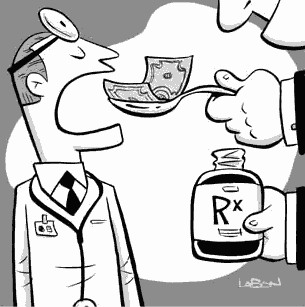 Almost the same time last year, I had talked at the postgraduate course of the Department of Pediatrics, University of the Philippines-Philippine General Hospital on the continuing saga of the doctor and the pharmaceutical industry.

I had mixed feelings giving the lecture. After all, the audience were doctors. They are all my colleagues and many are my friends. Choosing the right words to say was going to be a challenging task. My talk was eventually published in the Philippine Journal of Pediatrics last year.

The issue of conflicts of interest has touched raw nerves in the medical-pharmaceutical community in the Philippines.

Over a decade ago, the Philippine Daily Inquirer ran an article entitled "The Med Rep is OUT - with the Doctor". The article highlighted the extraneous relationships between the physician and the pharmaceutical industry through the medical representative. With the increasing scandals involving various forms of gift giving of the industry to physicians, many pharmaceutical companies and medical organizations are dissuading physicians from getting entangled in situations that may question their credibility due to conflicts of interests.

The other day, I overheard in a meeting that a bunch of doctors had decided to boycott a pharmaceutical company because the company did not accept their request to go to a convention somewhere in Europe! The doctors arrived at the conclusion that since the company had not supported them to conventions in the last 2 years, the accumulated 2 years was equivalent to a convention in Europe. Now that took a lot of gall, if not KAPAL NG MUKHA on their part and I felt ashamed that there are doctors that stoop this low just to attend a convention.

Let me call a spade a spade. You may want to un-friend me in your Facebook account after reading this blog. It is my final blog for the month and while I have been quiet, I also thought deeply about writing this entry.

First of all, the fact that doctors are wined, dined and given gifts is NOT an obligation by the company. WE DO NOT HAVE RIGHTS or ENTITLEMENTS to what the company gives as dole outs. If we accept these gifts, so be it. If we don't, then so be it as well. No one coerces us to prescribe a drug. It's not like they put a gun in our heads and then threaten to annihilate our families if we don't provide them the number of prescriptions they ask for. If we prescribe a drug in exchange for a gift, it is a form of indirect bribery. As doctors, we are already paid by patients our professional fee. That is payment in itself. Prescribing a treatment for our patient entails due ethical and medical consideration of the whole clinical spectrum or condition of the patient, before we write down what medicines they need to buy. If the drug is not needed, we should desist from writing down a prescription only to pay back or please the last pharmaceutical company that sent us to some out-of-town lecture or pleasure trip to never-never-land. If the patient does not need a prescription, tell the patient that. Our prescriptions should not be clouded by the incentives or perks that come along with the "field trips" or "excursions" or "lunch baskets" provided the industry. I will go direct to the point - there is no gift that is given without an exchange awaiting. The bigger the gift, the larger the investment of the industry, the larger the expectation.

These conflicts of interest have begun to be scrutinized lately by several ethical, academic and governmental institutions both abroad and locally. Ironically, while it is the industry that now calls on the moratorium to the excessive spending and lavish wining and dining to doctors, it is also the industry that started this marketing ploy that has now caught them in between the devil and the deep blue sea. Like rearing children, the industry has spoiled the kids rotten. The phrase "spare the rod and spoil the child" aptly describes the old disciplinary method of not punishing children when they are caught doing something wrong. As a matter of fact you will hear tales from the industry that doctors literally ASK for anything under the sun - from cars to trips to furniture to laptops to mobile phones to sponsoring their annual dues or convention fees to driving them to and from the airport or picking up their children to school or asking med reps for personal "favors" in exchange for keeping a "close relationship" with the rep in particular and the pharmaceutical company in general. But that's because they allow it and that's because the industry is so deeply mired in this traditional exchange "gift" that the marketing people have not changed the old "tactics" of selling a product.

I tell my students that a good drug, sells itself. A bad drug, needs a gift to go with the bag.

Some of my friends who practice in the United States once asked me how some of my colleagues here are in several conventions in the U.S. or Europe or Asia in a year. When I asked them how they know, they tell me that they read it as "shoutouts" with matching pictures of various tourist destinations from some of our colleagues almost every other month! Some of them even post the pictures on Facebook with the signage of the drug product they were asked to pose and promote.

One of the biggest contributors to sponsorship as an indirect form of bribery are the various organizational societies themselves. Touted as pillars of the medical circle, some of them violate ethical boundaries by demanding from pharmaceutical companies sponsorships in conventions which they collect convention fees and some threaten companies of boycott if they do not "contribute" to the success of said conventions. When the pharmaceutical company agrees to sponsor an event like a convention, the society must maintain its unbiased position by ensuring that the sponsors do not in any form pose bias in the promotion of its company's products by unduly providing more exposure than the other sponsors with lesser financial means. If the society cannot police itself at the get go, how will it expect its members to follow suit?

The National Pediatric Infectious Diseases Seminar (NPIDS) sponsored by the Baylor College of Medicine in Houston spearheaded by Infectious Disease pillars Drs. George McCracken and John Nelson had discontinued their program after almost a quarter of a century of providing unbiased CME programs because they decided to adhere to more ethical standards in the conduct of the seminar. Because industry did not want to sponsor events where there would be less exposure to their products, the pharmaceutical companies threatened to pull out sponsorships if the organizers refused to give them more exposure. Because the cost of running the program without the aid of the industry was a tall order and prohibitive, the organizers decided that it was time to end the program rather than give in to the coercion of the industry. I used to attend this seminar for over 10 years until it closed down several years ago. It was a great loss but I admired the organizers for taking a stand.

The issue on conflicts of interest are not solely the problem of doctors. Each professional field is mired in its own conflict, but the medical field is the only one wherein a second person or more persons are affected by the decision made by the primary person whom that conflict is borne upon - a decision that can affect life, cost/benefit outcome in limited or scarce resources scenario, and burden of treatment or diagnostic procedure when the latter is not required.

During a meeting with one of the pharmaceutical companies, they had expressed exasperation at the attitude of some doctors whom they could not provide "gifts" to. Some of the doctors were either angry or in denial or were bargaining (agreeing to sponsorships for local conventions instead of foreign ones) and I was shocked that some even had the temerity to reply, "paano na ngayon?"

Truth be told, the doctors are one of the highest paid professionals - locally or abroad. Let's face it, our patients know that. They see how grandiose some can be - toting a Hermes or LV or Prada, driving an Audi or Porsche or Pajero, living in posh villages, wearing signature clothes with matching shoes, belts and bags and bling, dining in 5-star hotels or expensive restaurants. The mere fact that we flash around all these largesse and yet ask pharmaceutical companies for "gifts" in any form leaves a bad taste in the mouth.

I am not saying that we don't accept a gift. When a gift is given, it should not expect anything in return. After all, if it is a sincere gesture, it should not expect payback. If the gift provided is part of an exchange deal, then it should not be accepted. It is unethical to demand anything from a company. What the industry provides or gives us is a privilege and not a RIGHT!

After 10-15 years of studying to be the most distinguished profession in the world, we cannot let conflicts of interest destroy our integrity. At the end of the day, our patients should benefit from our judgement. They pay our professional fees, put food on our table, a house over our heads, send our children to good schools. They deserve nothing less than the best standard of care without undue influence from the pharmaceutical industry.
Posted by Kid at heart at 7:13 PM

agree w/ you 100% doc. thanks for this post; may i share it with my ob colleagues? thanks again;)

Of course you can share it! That's why it's posted publicly. Thank you for liking it.

THE TRUTH HURTS....BUT ITS THE TRUTH

How I wish that all doctors are like you. Thank you for that beautiful blog. As the Filipino saying goes, "bato bato sa langit, tamaan huwag magagalit"