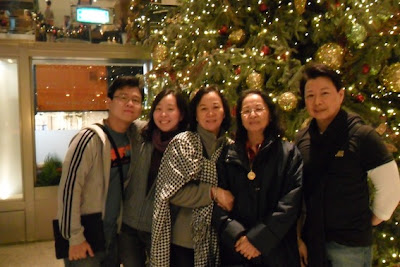 My family and I spent the New Year in Hong Kong.

The respite from work was something all of us were looking forward to. It also was our annual bonding moment.

While we were on the PAL flight PR300, I could not help but recall the unfortunate experience on the ground. We were a party of six. The guy that checked us in was nice. My travel agent informed me that we had pre-assigned seats - all seated together. On check-in, my mom and I were given seats at the tail end of the plane! When I asked why this happened, he checked with his supervisor. She just shrugged him off. He apologized and said that I should contact my travel agent for the mess. Which I did. My travel agent was surprised and I gave my phone to him so they could talk. When he approached the supervisor again, she was dismissive. I blew my top at the bitch and told her that I paid for FULL FARE ECONOMY tickets and that these were premium seat fares! Only those flying on highly restricted plane fares are put at the back of the plane. I drew my ire on the ground supervisor and unleashed a volley of remarks that she was rude, unaccommodating and inconsiderate! Her eyes did not leave the computer and she told the guy who was checking us in to just give us the seats. Since the outsourcing of certain services of Philippine Airlines, I have never been happy with this flag carrier. So much for the local aviation industry.

We stayed at the Excelsior Mandarin Hotel in Hong Kong island. Three rooms all Harbor Views. For a Mandarin Hotel, this was one of the times that I gave it a thumbs down in terms of attention to the needs of the customers. While the hotel is within striking distance to the shopping malls and the MTR at the heart of Causeway Bay, the service of the staff was sadly lacking. Even if the hotel was full to the brim because of the holiday season, it was no excuse for inefficiency and poor customer service for a Mandarin Hotel.

We took the streets after getting an afternoon nap. Moving around in HK is easy with the MTR. After those "Kodak moments" at the Tiffany Christmas Tree and Carousel, we went around Central. I could not help but "eavesdrop" on our "kababayans" working in HK. Everywhere we traveled there was a Domestic Helper who happened to be Filipino. It was the Christmas and New Year holiday and they were with other families, far from their own. Real life telenovelas. When we went to Disneyland to see the new Toy Story theme park area, I wandered into one of the souvenir shops. I overheard a Chinese woman telling her Filipina maid "I know you have two kids back home. Go get two shirts from the rack and I will pay for them. You just choose which ones you like." The Filipina maid was flabbergasted and she turned around, lugging her two chinese wards and started choosing two shirts for her own kids. She had this smile on her face that I could not help but empathize with. When I stepped out of the store, the parade was on and you could appreciate several Pinoy performers among the crowd. The band that plays in the promenade are actually Filipinos.


The sacrifices our Filipinos go through in order to send home money or bring home gifts was heart wrenching and depressing. But the simple joy in her smile told me that life was not easy back home and that sacrifices had to be made even in the most difficult circumstances. As we crossed Charter House and Alexandra House that evening for dinner, we noticed a Jollibee store near a BDO bank in the side streets. My nephew hurriedly went to the Jollibee restaurant and we noticed that it only had Pinoy customers queuing for the chicken advertised by a bee.

Of course, the rest of our stay was pure shopping - from Tung Chung to Causeway Bay, from the outlet malls to the high-end retail shopping - it was a shop till you drop scenario!

During the midnight revelry to the New Year countdown, we had buffet dinner at the hotel. The revelry items were provided by the hotel. As it approached midnight, we rushed to the room to watch the fireworks display over Victoria Harbor. Since all our rooms were fronting the harbor, the spectacle was a sight to behold. Like most countries, the fireworks display is only for 5 minutes. There is no individual firework show like the Philippines.

We needed to return to Manila on New Years day. The kids and I had regular work. We lugged back to the HKIA for the 115PM flight from Hong Kong to Manila. Our flight and all other Manila bound flights from Hong Kong were severely delayed. The reason? The NAIA airport was shut down in the morning because of the heavy smog of the revelry the night before. I could only sigh. I have probably never understood the logic of having to spend hard earned money for fireworks - only to burn them in a few seconds! In a country as poor as the Philippines, well I guess it really sounds idiotic, so to speak. And so our 115PM flight left at 4PM, with PAL having to foot HKD$75 per passenger (which meant additional expense for the poor flag carrier) and the plane getting diverted to Clark Pampanga (which meant that we could not land and just kept circling Mt. Pinatubo) and arrived sadly around 7PM. It was indeed (according to my mom), the longest flight we ever had from Hong Kong!!! All because some nut job was polluting the Philippine skylines from 11pm to dawn! Sheeshhhh!!!

There were many lessons learned in this trip and hopefully, the year of the water dragon in the Lunar Calendar brings better fortune and brains to all of us! Happy New Year!!!
Posted by Kid at heart at 7:30 PM