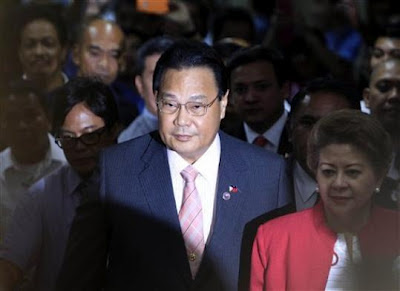 Or maybe I just didn't get it.

I had better things to do than watch the three hours zarzuela on TV on the Chief Justice of the Philippines taking the witness stand in his impeachment trial.

But I made sure that when I got home from work I needed to hear his side. I still gave him the benefit of the doubt.

So he and his wife come from well-to-do family. That's what he said. They are people beyond other peoples means. In short, we're poor and they have moohlah. Boo! When he was starting in his law practice, he had the foresight to invest money. At the time he was practicing, he said, the currency exchange was $1 = P2. OMG! He was already a lawyer in the 60s?!?! Okay, so let's do a little math. He is 64 today. He was born in 1948. Which means that in 1960 he was 12 years old. OMG!!! He was practicing law already during this time??!?!!? Naman naman naman. Kung si Cuevas pa yan eh naniwala ako. But as far as I know, when I was growing up in the 60s, the exchange rate of the peso to the dollar was already $1=P4.

Let's give him the benefit of the doubt again.

Of course, then there's the drama. I didn't think he scored pogi points by being emotionally moved. And when the cameras turned to the employees of the Supreme Court who were apparently drawn to tears in what was the telenovela of their boss, well that peeved me. It dawned on me that these people in the Supreme Court must be made of the same material, same character and yes, same moral fiber - to stand by his side to the end.

And then more drama unfolded. Did I hear it right that he quoted a republic act on bank secrecy law - citing that the dollar accounts were privileged and that he was guarded by the law not to reveal anything? OMG to the nth degree!!! So how could a guy like the Chief Justice hide under this cloak? If he had nothing to hide, he should have cited that there was such a law but that because of transparency, he was just showing what he had and to hell with the law! But of course, he twisted the drama and took out a piece of paper, signed the waiver and said that all those who signed for his impeachment should show their dollar accounts as well! Naman! Hindi naman ako tanga noh! What about the idiots who did not sign? Yung mga karancho ni GMA na nagnakaw nung panahon ni Gloria. They didn't sign. So they're exempted?

And the persecution complex of CJ was just apparent. He started ranting, raving and emphasizing how he was persecuted in the last 5 months by the Aquino administration. Because? I didn't get it. Was it just about Hacienda Luisita? What vengeance was he talking about? I mean, the palace wanted to get Merceditas Gutierrez out of the equation as well. Was she in any way connected to Hacienda Luisita? When Angelo Reyes shot himself, was it also about Hacienda Luisita? Kawawa naman yung Hacienderong Presidente natin at lahat na lamang eh kasalanan ni Hacienda Luisita.

Then the dramatic exit (note, walking on his two feet) then comeback after all exits were sealed (note, in a wheelchair looking haggard) was the coup de grace. He had a hypoglycemic episode. Dang! My father was a long time diabetic when he was still alive. I am a doctor. And hypoglycemia is easily managed. I can tell drama when I see one and that was one hell of a dramatic episode that fooled a lot of sympathizing kibitzers.

The summary of the news about CJ Corona's taking the witness stand only told one story. That here's a man in the highest office of the land who has lost all moral ascendancy to lead. Perhaps it was a fight to the finish for pride. It was a fight to the end to clear a tainted name.

If you understood what the drama was all about yesterday, then hurray for you. I didn't. Was he sick? Yup. I think he needs a mental check-up and when his mental status has been cleared, the he can probably go back to practicing law again.

In the meantime, the only way out of this is to resign. The people of the Philippines need to move on. Enough drama. Enough justification that didn't make sense. Enough is enough.

tapos hindi pa testimony yun. that was just the opening statement. no offer of evidence no direct ergo no cross examination. plus he accused and maligned a dead person who cant defend himself.

I'd like to correct you. If you listened closely, he did mention it was in the late 60's, around 1968. Not early 60's. Enrile clarified it. Law school at that time, took a shorter course than it takes now. :)