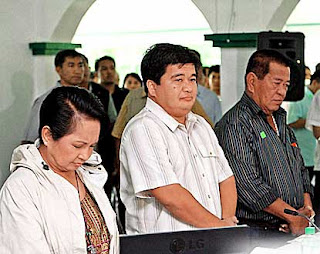 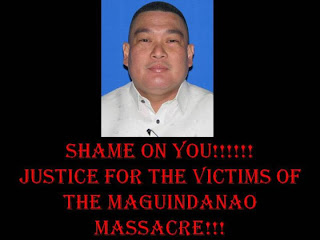 Aside from the fact that these three people have the first letter of the alphabet (A) in common, they also have a common denominator - ass**le.

Ironically, I guess the Filipinos have been in a state of apathy for so long a time that they wouldn't care less about how these three idiots ran the whole justice system in this country.

The banana republic has received so much flak, not only with respect to the issue of graft and corruption, but to the issue on the kind of judicial system we run.

With the way things have been going for this country, it is not really a far-fetched idea that justice in the Philippines, has literally gone to the dogs.

The massacre in Maguindanao, a result of the dynasty-driven thoughts of our politically appointed and elected officials, is the perfect example of justice that has all gone awry in the country.

With Acting Justice Secretary Alberto Agra stepping into the foray and clearing both suspended Gov. Zaldy Ampatuan and Maguindanao Vice Gov. Akmad Ampatuan of complicity in the historical Maguindanao massacre, the public outrage over this decision has become the central topic in media.

Ironically, Agra is in a precarious position. He is both the solicitor general and acting justice secretary. This "dual designation" has been questioned by many lawyers and the Supreme Court has ordered Agra to explain why he "should not be removed as concurrent solicitor general for supposed violation of the law against holding multiple positions in government." Noted is the fact that in the 1987 Administrative Code, the Office of the Solicitor General and the Department of Justice should be "independent" and "autonomous". Obviously, at the rate Agra is deciding on matters, it seems that he is part of the "clean up" team or as Malacanan would call it - "transition team" - when they finally burn all the skeletons in their closet before they dearly depart (hopefully they would).

It is not surprising that Bishop Oscar Cruz has called Agra simply a 'clerk' and that his 'boss' is allegedly behind all of Agra's decision. Of course, Malacanan in the statement of Executive Secretary Leandro Mendoza is that "Ms. Arroyo always respects the decision of department secretaries because she considers their own expertise and their own competence on their own field of interest."

And what, pray tell, did Mendoza mean by that? This nincompoop comes up with such a pathetic excuse as this. He is passing the buck back and forth, when we all know that when GMA becomes incensed with decisions of department secretaries not to her liking, she finds a way to replace them, just as she had done with those that do not espouse her kind of thinking, in the past. Somebody should slap Mendoza to keep him awake.

I have a strange feeling that most (if not all), the spokespeople of GMA are always high on drugs. They are incoherent, poorly knowledgeable, and if you put them actually in a corporate environment, these are the kind of people that would be the security guards at the doorstep of your office. They're only good for getting you your cup of coffee for the day. All of GMAs allies should undergo drug testing every week to check what kind of drug they are getting. Dang these people!

The sad part is that as a people, we have become so callused about the events that we refuse to budge from our seats.

A friend once told me that I should not be too vocal about what I feel, especially against the government.

I retorted - what is there to fear? It's not that I'm like Miriam Defensor-Santiago that I would be willing to eat bullets for breakfast. I am just angry at what is going on. And if you don't feel as much anger, at least feel as much pain as the people whose families were buried, all in the name of money and politics.

And that's the problem with this country.

As long as your kids are going to school and no one is hurting them, as long as you're earning relatively well and have a roof over your head, as long as you can afford to have some simple pleasures in life, then it's okay. Other people's problems are not yours.

That's where I disagree.

And many of us wallow in our own world, not even caring about so much indignation, except being a spectator the the scene. It is not only when such hideous crime occurs in our own backyard are we willing to move. And we expect to get sympathy when once upon a time we refused to give sympathy.

The world is a circle...

When the very figure head of this country allows this kind of travesty, whether that decision is an individual's decision or not, you know that this country is doomed. A good commander-in-chief will always be one who is willing to be the captain of the ship. Steer the ship through a storm. Be accountable. And in the chain of command, be answerable to the sins of all her cabinet members.

The mere fact that Malacanan is giving us the run around and passing the buck back to the sacrificial lamb, just goes to show you the kind of president we have had in the last 9 years.

A few days from now, we will troop to the polls to choose our next president.

It is with fervent happiness that I look forward to see the little rat finally step down from her beloved throne.

It is with fervent desire that I pray that we make the right choice in electing the next president and other public officials who shall help steer this sinking ship in a different direction.

Never in the history of Philippine elections have the people become more involved in the campaign for the next president and other public officials, as this coming May 10, 2010 elections.

As to whom and how we vote will be the final shining moment when we come together as a nation, to save a country, and provide Filipinos hope for a better future.
Posted by Kid at heart at 1:08 PM