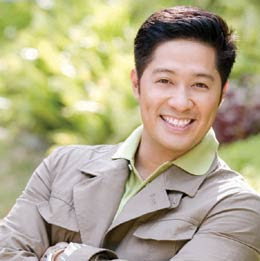 I was watching ANC last night. They had Guido Delgado, the mastermind behind the second "psychiatric report" that allegedly confirmed that presidential candidate Noynoy Aquino sought psychological help in 1979.

I was appalled by this guy. I will not elaborate on the TV interview, but he kept on emphasizing that he was doing it because HE LOVES THIS COUNTRY! Sanamagan. Who doesn't? It's like, if we are campaigning for Noynoy, we don't love this country? This guy is really an idiot! Damn him! It's like - well if you don't vote for Villar and you vote for Noynoy and don't believe that Noynoy has a psychological history then you don't love the Philippines? I didn't see the logic there.

A couple of minutes later, Adel Tamano (whose picture is on this blog), who is running for senator under Villar's banner came on the air to belie the claims of Delgado.

First, it was not true that the NP had allowed Delgado to speak and that they were admonishing Delgado's claims and were disappointed and angry at what Delgado did.

Second, it sent a wrong message home and was destructive to the image of the Nationalista Party.

Finally, which is what caught my attention, was the statement that Atty. Tamano made - that we should rise above all this mudslinging and below the belt tactics and learn to campaign more intelligently. Based on platforms, agenda and what the person is capable of delivering. Not based on hodge-podge hearsays or character assassination or black propaganda.


In the words of Tamano - “To be very honest, I am really so tired. Pinapahirapan nila yung trabaho ko. I joined the NP I was hoping I would be talking about yung vision namin for the country. That’s what I wanted to do as spokesman pero hindi. Instead of doing that I’m on your show now defending this stupid tactic na ginawa ng isang NP supporter namin. Parang nakakahinayang eh. Nakakasama ng loob to tell you the truth.”


My goodness, now there's one guy I'm going to campaign for! For all the irony that the idiots who seem to be throwing tomatoes at the moon and stars, there's one guy who had a more intelligent perspective on what campaigning should be.

In a few days, we all troop to the polls to select the next president of the banana republic. Let's not cast our ballots based on feelings, or vested interests, or conflicts of interest, or what's in it for us, or how much promises these candidates will give. Let's base it on a rational assessment of their credentials.

This will be my last campaign pitch. Whoever you vote for, and I trust we all believe that we love this country, please make sure that you choose not for yourself. You need to give this country a chance. One final chance to show the world that we can be a cut above the rest. Can we just have a little sense for common sense or did we lose that somewhere in our campaigning for whom we want to vote for?

Remember, whoever we vote for, it will be six years. Six years of heaven, purgatory or more hell?
Posted by Kid at heart at 12:59 PM