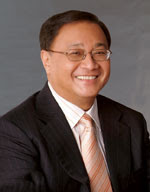 For someone of the stature of Manny V. Pangilinan, the imbroglio of his "plagiarized" speech delivered at the Ateneo de Manila drew front page attention to the local newspapers. Then it became the talk of the blogsites.

So why MVP? No one ever scrutinized the speeches of GMA. It would be some watered down "pat on her back" sort of speech about how great a job she did. No other speeches actually came close to being dissected line by line as MVPs speech.

I guess it's because MVP is envied at. He has not only become a household name for the rich, the famous and the oligarchs but an icon in the business circle as well.

He has built an empire, with his company owning real estate properties mainly at The Fort, major shares in utilities (PLDT and Meralco), tollways, TV station, hospitals, universities...and the list goes on and on and on.

During the last graduation rites at the Ateneo, he received an honorary doctorate degree from the university, and gave a, well, resounding inspirational speech.

A few days later, what supposedly was a great speech, turned out to have certain portions of it "plagiarized".

The it got posted in Facebook. Then it was all over the news. For some media sectors, it took it to the extreme of deserving an editorial for the controversy.

My hats off, however, to MVP, who apologized sincerely for this dilemma as it was his speechwriters who had written it. Instead of naming the speechwriters, he took the blame. He submitted his letter of resignation as chair of the board of trustees of the Ateneo.

Strangely, the Ateneo board rushed to "put out the smoke". It decided that the Ateneo would reject his resignation. What followed in the days to come was an exchange of mudslinging from those who thought that the resignation should have just been accepted. There was talk that the board rejected the resignation because of the influence and "charitable" coffers of Mr. MVP. Most of the students and faculty at the Ateneo were being ridiculed at the board's decision. But understandably, the prestige of having MVP at the helm of the Ateneo would be lost if MVP would not be chair any longer.

Former Ateneo basketball star and heart throb Chris Tiu even went on to the extreme of trying to salvage what was left of Ateneo's pride by defending the plagiarized speech of MVP. Tiu, too, received disconcerting comments about his position regarding the issue. Tiu was asking for sympathy and understanding and even likened the scenario to Jesus Christ's plight. Idiotic? No - stupid! For all the accolades Tiu had garnered, his thoughts on the matter spelled the kind of breeding the Ateneo had raised him. It was all about fame and fortune.

And any way I look at it, I just thought that what MVP did was an honorable thing.

A man of his stature in all humility had to accept fault and in defeat made the right decision. The Ateneo administration should accept this. So should its alumni. After all, it wasn't like it would be their ultimate demise. After this imbroglio, life does go on.

In reality, a man as busy and iconic as MVP does need a speech writer. But his speech writers should not try to impress themselves by claiming lines which they "borrowed". The latter, is called "referencing". Borrowed lines, should be cited and due credit should be given to who initially wrote and published it. It is, after all, an intellectual proprietary right.

That's where the rub is. His speechwriters had belittled the mental capacity of MVP and in the process of trying to earn points for themselves and probably their boss, had degraded the very person who puts food on their table.

I believe that at this point, MVP has gallantly made his own stand on the issue.

And this is where I am at awe with his decision. Even in defeat, he stands out as a hero to all. Apologize, return the gift, resign, and then move on.

If all leaders were like him, this would indeed be a better country.