The fury of HIV infection - is the Philippines ready?

The National Epidemiology Center released the September 2010 data for newly diagnosed HIV cases in the Philippines.

Of the 153 new cases last month, reported mode of transmission was sexual contact in in 98% (150 cases) with only 3 cases reported from re-use of needles among injecting drug users. Males having sex with males (homosexual or bisexual) was the predominant type of sexual transmission (83%). Most (9%) were asymptomatic at the time of reporting. 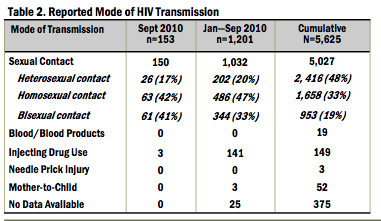 Three (3) of the cases in September 2010 were documented AIDS (acquired immune deficiency syndrome). The median age of the AIDS cases is 25 years. All three cases were males having sex with males.

Based on demography, 14% (N=21) of the reported cases last September were OFWs. Most (91%) were males with a median age of 32 years. All cases acquired the infection through sexual contact - 75% males having sex with males.

The total number of reported cases from January - September 2010 alone was 1,201 or an average of about 4 cases per day. In September alone, the number had the highest jump to 5 cases a day being reported positive for HIV infection.

I share the update with my blog readers so that they are informed on the situation of HIV infection and AIDS in the Philippines.

What do the data show?

1. That there are more new cases reported daily. These new reported cases are voluntary. And therefore the statistics are an underestimation of the true situation of HIV infection in the country. It is surmised that it probably is only the tip of the iceberg. Which means that most probably we are looking at about 10-25% of the actual cases of HIV in the country. Extrapolating that to the real scenario would mean that there are about 5 new cases a day.

2. The practice of safe sex is mandatory in the current post-HIV scenario. Of course, I am in no position to demand monogamy, but if it cannot be avoided, I advise people to please try to contain the consequences of unsafe sex among themselves. While I see all the billboards splash the walls with the NO SMOKING ads and the NO SECOND HAND SMOKING advertisements, HIV is very much like this as well. Confine the infection to yourselves. If you cannot abstain from having sex, do not get others infected at the very least.

3. No one dies of AIDS. In a country like the Philippines where infectious diseases is the leading cause of morbidity and mortality, an era where you have both HIV infection and say, tuberculosis, is devastating. You will not need contraceptive methods to decrease the total number of Filipinos multiplying in the country. HIV infection is a debilitating illness that not only drains the family emotionally but the government financially as well. If we have an outbreak of HIV infection, that will put the country three steps back in any of its program to move forward.

4. As you will notice, the bulk of the age group affected are young. Very young. I can only surmise that these are those who probably engage in unprotected sex and promiscuous behavior. As evident in the data, the bulk are males and the bulk are those that engage in male to male sex (whether homosexual or bisexual in nature). While the data for the mother to child transmission rate is very low, this is good data. If a program is in place early, it can focus on target individuals especially the teenagers who have very minimal information on sex education because the church and government officials are struggling to find a middle ground on when and whether it is time to provide sex education to our students. 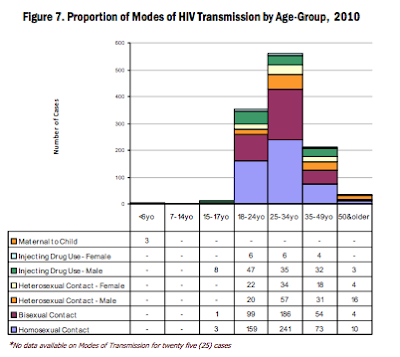 5. There is a need to educate the OFWs as well on the growing problem of HIV infection. While it is true that loneliness finds its way to seep into the loins of those separated from their loved ones, it is sick to cavort elsewhere and bring the infection home to scatter the seeds of wrath with your beloved.

The data is alarming and should be a wake-up call and an awareness especially among the youth and those that practice unsafe sex. There is no excuse for ignorance. Technology today has changed the pace of the world by providing access to valuable information for everyone. We can use technology to our advantage by disseminating this information.

But there will be those that will choose to ignore this. And use the internet for desires of the flesh - a source for meeting up scrupulous people for copulation and lust. A recent study showed that the youth are most vulnerable to the latter. Raging hormones in this age group is no reason for acting careless and stupid.

What goes around, comes around. The fury of HIV infection has not yet reeled its ugly head, but the 5 NEW cases a day from last month's data should serve as an early warning that this storm is not far behind.

Knowing the Pinoys, they will never be ready for this, unless we change our paradigm today.

[Data from the National Epidemiology Center, Philippine HIV and AIDS registry, Department of Health, Philippines. Click on the illustrations/graphs/tables to see a larger image of the data]
Posted by Kid at heart at 1:20 PM