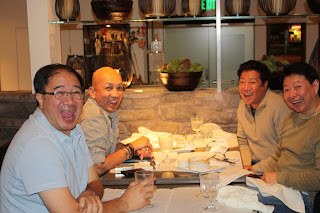 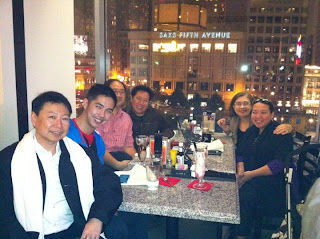 The American Academy of Pediatrics National Conference and Exhibition meeting in San Francisco was the agenda for my trip to San Francisco this October.

In between the meetings I spared all the rest of my time bonding with friends who had migrated to the Bay City. I stretched my stay an extra 2 days and in between their very busy schedule, I appreciated the fact that they too, took an extra 2 days off just to be with me.

I will not blog about the conference, as it would not interest my readers on what did and what did not go on in the meeting. It was, however, a good meeting considering the fact that the last AAP meeting I had attended was over 6 years ago. This was a reunion for my continuing medical education.

I had missed the wedding of my goddaughter in Manila last year. With my sister suddenly being in the hospital and all, I had sorely missed the day she said “I do”. She, her husband are based in San Francisco. Malu had flown there a few months ago to take care of her when she gave birth. Maggie who is now 2 months old was a joy to behold. Aside from the fact that she reminds me that I am now much older, I have come full circle in my medical career. My goddaughter had grown up with me and she is now a mother as well. How time flies. Malu, my kumare, looked contented and peaceful. Her giggles, laughs, stories and pride could not be contained.

I have always believed that life is like a play. It is made up of two acts – the first act is one of achievement. That is the easiest role to play. We try to find ourselves in the first act. How we play our role in Act I prepares the storyline for the next act.
The second and last act is one of depth. It is the most difficult because this story builds on the first act. Our roles are more challenging because we need to sustain the role we played in Act I. It creates the epitaph of the life we have lived. And there is no rewind here. No retake. One final performance before curtain time.

I think Malu has found her final act. Her contentment. She has finally find home, in San Francisco.

My other friends were with me during the various days. Jojo, Francis and Roland had relocated to San Francisco varying from several decades to several years ago. Each with their own stories to tell. Each had a reason for turning over a new leaf or finding himself or herself in San Francisco. Each finding a place where they could move on.

Perhaps like many of our countrymen who find a place to start over again or begin a new chapter in their lives, San Francisco has provided as a haven for my friends in some way or another.

During the few days I was there, we talked about old times. We dug up memories from our closets, we reminisced on our growing up years. Friendship bonds built over three decades drew moments where I became misty eyed. I had to put on my sunglasses or turn my back on them so they could not see how emotional it got to be.

Between the laughter and the stories we shared I could not help but wonder where life would eventually lead us. I missed those days where I could have friends to turn to at every tragic event or run to when problems are too difficult to handle. I missed those times that I needed a friend to talk to or console me when I’m feeling down and out. I miss the days when I would not have to be accountable for my misdeeds or would get a pat in the back with my accomplishments.

I missed being free and being me.

On the way home from Stanford on the last day, we talked about where life would bring us next.

And I will always be grateful that somewhere in our lives, our paths had crossed and intertwined.

It is the final act in the stories of our lives.

Wherever life will lead us now, I know that our paths will meet again. Because there was depth in this final act.
Posted by Kid at heart at 4:52 PM